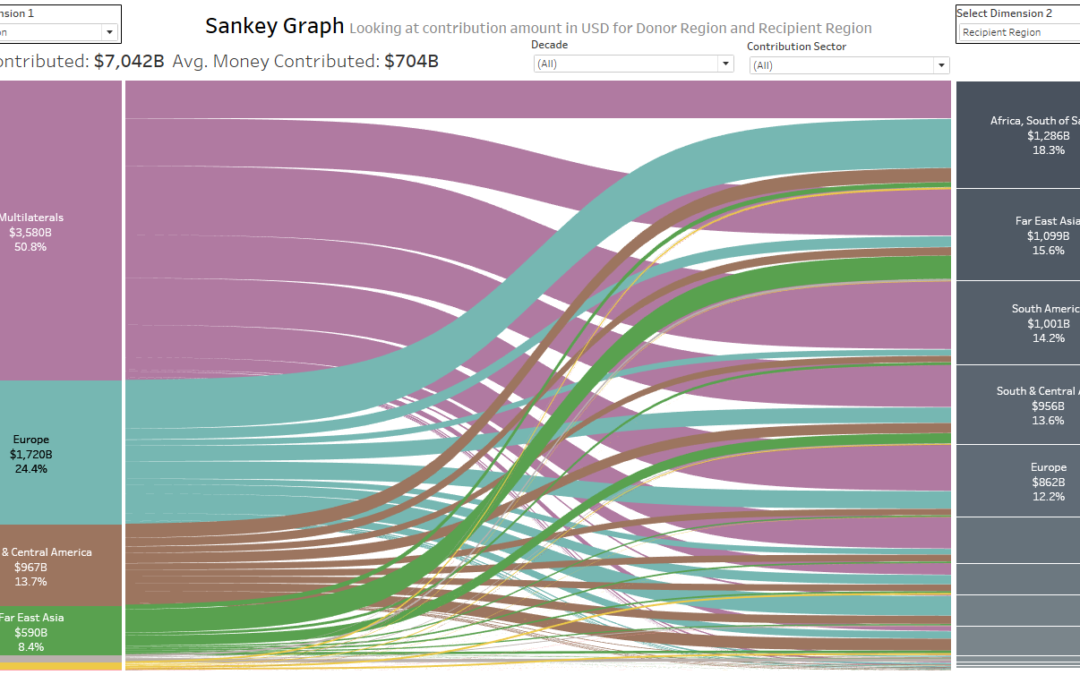 We started off our first dashboard of the week with a dataset from a Storytelling With Data Challenge. Cole came earlier in the week and mentioned the challenge that she had started, hence it was only fitting that it be our first challenge of the week.

I decided on using Dashboard Week as mostly a chance to embrace new graphs that I wouldn’t typically attempt for a client. For this challenge, I went with a sankey chart. There is an excellent resource by Ian Baldwin that shows exactly how to make the sankey chart. It is paramount that these steps are following exactly to a T! I had to download Ian’s workbook and reverse engineer it before realising it was the ordering in just one of the nested table calculations that was causing an error.Some data preparation was done on Alteryx to make it easier to work with in Tableau. In Alteryx the file was immediately outputted as a .yxdb so that it was more efficient to run. From there, only relevant fields were selected so that the dataset would be smaller. A new column was created called ‘Decade’ where each year was rounded down to the nearest decade. After, the sector names were grouped so that the list decreased from 49 to 12 fields. This makes it easier in the sankey graph as the fewer the members, the less cluttered the graph looks. Finally, it was outputted as a .hyper file so that it’d run smooth on Tableau.

Once the sankey was made and formatted, a few additions were made to differentiate it. 2 parameters were made, one for each dimension of the sankey graph. This allows the user to choose between Donor Regions, Recipient Regions, Decade and Contribution Sector. This makes the chart more dynamic and informative than just having donor/recipient region. Filters were added for Decade and Contribution Sector so that the data could be filtered for more specific values.

To make the graph easier to read, highlight actions were a fantastic choice to focus just on the sankey arms that relate to the chosen member in a dimension. However, it made more sense for the numbers on the right side of the sankey to change when a member in dimension 1 was selected. To do this, a filter action was added. What caused problems was the order and sizes of the members in dimension 2 changing after a new selection. To remedy this, fixed LOD calculations were used in the background on sort/size so that they stayed the same as the overview level view.

To wrap it all up, tooltips were cleaned and KPI’s were added. I tried to play with set actions to drill down Regions/Decade, however, it looked too cluttered for it make sense.