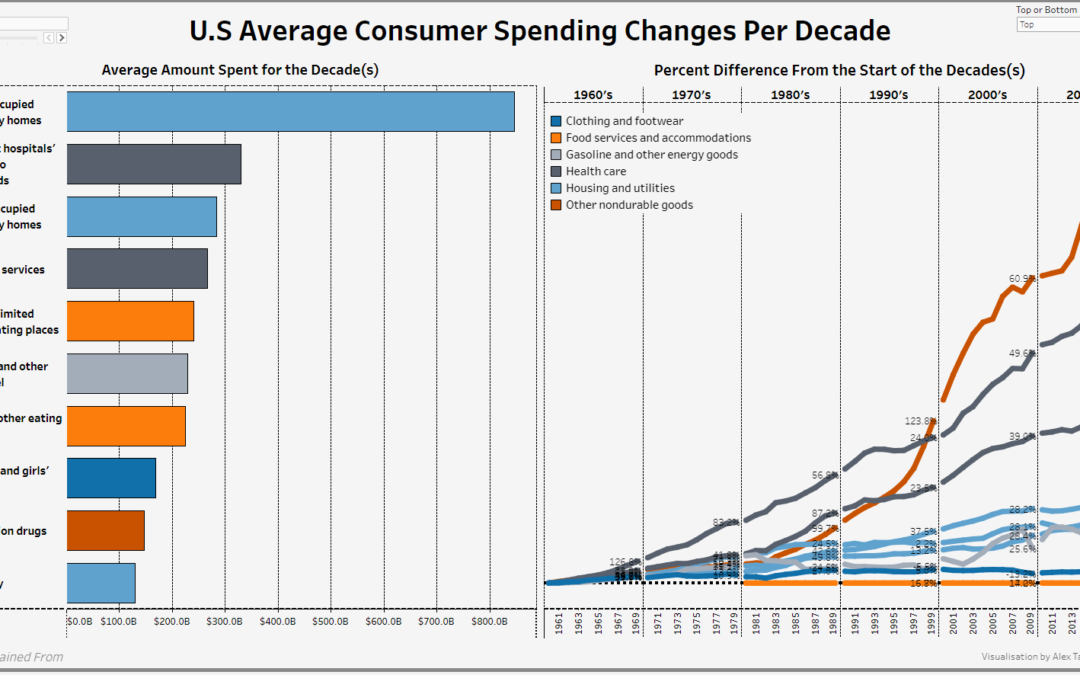 Today for dashboard week we had the task of making a visualisation of American consumption. The Dataset was used in the application process for the next cohort for the Dataschool Down Under.

Opposed to yesterday, we are allowed to use Alteryx again to do some prep. I felt sorry for the new cohort who had to do without. The dataset had some tricks in it which a few of the dataschoolers spotted. There were a few aggregations of data in the in some of the rows, they could be identified by useing the colon, or by having the word aggregation in the text. Another issue was that the amount of money was not normalised to reflect current prices. To fix the money issue, I used a table of a consumer price index (CPI) from the US government, and with a simple calculation I was able to make 2019 a “base” year, with every other year being divided by an “inflator”. This work was essential to getting the data cleaned, otherwise one might end up with values larger than the US economy. The work would not have been possible if not for Anders Wold and Fairuz Khan

Below can be seen the Alteryx workflow

Validation of the adjusted monetary values can be checked here. Values for inflation can be found here.

The story I wanted to tell after investigating the data was to do with the difference between things Americans spend the most on and least on per decade. I didn’t want too many results so I filter by the top 10 for the top and bottom. I coloured my visualisation according to the different “levels” in the data set, for example, I wondered if things like healthcare were at the top of the list, but also wanted to see what different things made up that category.

Below can be seen a gif of me playing around with my dashboard. I wanted to highlight the opioid crisis in America that gripped the early 90’s to this day. Other things stood out to me like “water transportation”, so ferries or boats have been increasing decade on decade. I also wanted to show off the new transitions in Tableau (version 2020.1.4). They can be found under the header tab: format then look down to “animations”.

The left side of the chart acts as the primary driver for the right hand side. I want people to use the highlight action to be able to see what things are. on the end of the lines, I have put the percent different from the start of each decade. The legend also appears to be dynamic, but this is just done through a floating vertical container. I think this viz also really highlights the changes in consumer spending, for example, calculators and typewriters were bought in the 60’s. but these drop off after technological advances happen in the late 80’s.

Here is a link to the viz.

I cleaned data used to get into the dataschool, I supplement it with historic inflation data. The final result is a decade by decade analysis on the top and bottom things Americans spend their money on.