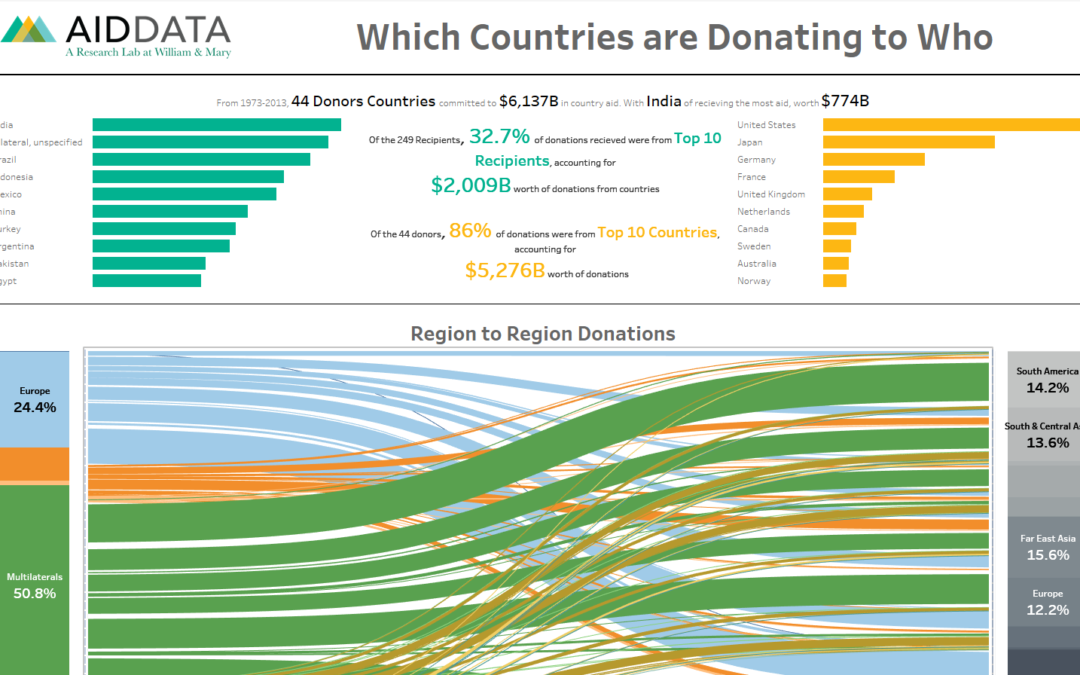 Day one of dashboard week Kicking of dashboard week we were given storytelling with data challenge dataset on the who and where of aid donations from 1973 -2013. The dataset was fitting as we had the honour of having Cole Knaflic come and talk to us during the day and also had a tableau user group event in the afternoon. Both events meant we didn’t have a full day to explore and work with the data to create our dashboards.

After a quick glance at the data, my first thought was to attempt a chord diagram. Breaking one of the core data visualisation tips from Cole Knaflic, by not keeping it simple and understandable to most. But my thought process being when else would I ever get an opportunity such an impressive chart.

But after finding no clear tutorial on how to create it in Tableau and having time boxed it, I moved on to my second visitation idea, a Sankey chart. Another type of chart that I had never created and had been wanting to, and also breaking the tip of keeping it simple.

Luckily there are plenty of tutorials on how to make this style of chart. Eventually, I was able to make my Sankey chart, though it took me a couple of goes of reading over each calculation I had to make. After finishing it, I decided that it had too many donor and recipient regions for it to be understood but knowing the time restraint I keep it, even though I hated it.

Then my focus shifted to how can I quickly inform the audience of some key findings. Adding in some bar charts of top donor and recipient countries, also adding some notations on my findings. What was left to do was add some highlighting filtering, formatting and general zhooshing up of my dashboard.