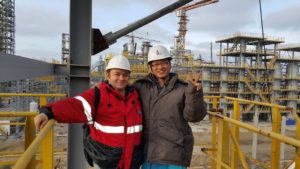 I want to tell you my success story of transitioning from construction to data. First of all, I will tell you about myself. I received my bachelor’s degree in Aerospace Engineering at Baltic State Technical University in Russia. I obtained a master’s degree in Mechanical Enginering at San Diego State University in California, USA. After that, I could not find any decent work related to my background after moving back to Kazakhstan and where I am originally from. However, it was a construction boom there, and I could find a good opportunity in construction. So, I became a construction manager in a big constriction company in Almaty. I had to pick up stuff on the go which I did not know, and after a couple of years, I became a mature project manager in construction. I liked this job, and my knowledge from universities helped me, of course. I worked with many different people, with domestic and foreign clients. I travelled a lot within Kazakhstan to manage construction sites and business trips to China, Russia, and Germany. I could be away from home from a few days to a few weeks. Nevertheless, things changed after I got married. Of course, my wife did not really like me being away from home, and after the born of our second child, I started to think about changing my work. My wife and I applied for permanent residency in Australia at that time, and I was about 35 – 36.

I did not really consider working in construction anymore, neither in Kazakhstan nor Australia. So, I decided to drop construction at all and do something different. However, what should I do after ten years of the effective project manager role in construction? I started to search the Internet. I wanted to do something related to programming or computation because, during my master’s degree, I had to do some mathematical modelling of sintering. I used Fortran and Matlab for that. I considered doing web design, but I realized that there were many web designers and it would be hard to compete with them, and I came across udacity. They offer online nanodegrees in different areas. So I decided to go with Data analysis and Data Science. These two areas were in demand and continue to be sought after nowadays. I took a few courses like Programming for Data Science, Data Analysts and Machine Learning. I successfully received two certificates in Programming for Data Science and Data Analyst. Even though many people sceptically thought about carrier change, except for my wife and parents, I was able to twist it in a different direction. A huge advantage of taking online courses is you can work and study. So, I took online classes while still working in the construction company. It was not easy, though, but doable. After completing my study at udacity, I had a few projects to show at my interview. I impressed my future employer with all these projects at the interview at the biggest bank in Kazakhstan, Halyk.

So, I started to work as a Data Scientist at Halyk Bank. It was an entirely different and challenging experience for me, and I had to learn a lot again! Never stop learning! Yes, each bank has its ecosystem. It has many departments from businesses to IT and call centres. All of them generate data which you have to deal with it somehow. After a year in Halyk, I was invited to the Sberbank branch in Kazakhstan as a Data Scientist, the Russian biggest bank. After more than a year at Sberbank, I finally moved to Australia. I applied to The Data School in Melbourne, successfully passed two interviews, and started my journey at The Data School in October 2021 in Melbourne. You can also find The Data School in Sydney. The Data School was founded in the UK and had a unique program for those how wants to become data analyst and are passionate about data.

The program was designed to take classes for the first four months, and we are paid for taking these classes. We have learned different tools such as Alteryx, Tableau, and Power BI during this four-month period. We have learned various aspects of the Data Analyst role, tricks and techniques. By the end of the four months period, you became a mature data analyst and ready for your first six-month placement out of four placements. So, my first placement should start in February 2022.

If you are on a fence and thinking to change your carrier or you do not know which way to take in your career from the very beginning, then think about becoming an expert in data. If you are scared of programming, you should not because there are many tools like Alteryx, Tableau and Power BI, for example, requiring minimum programming skills. However, if you like programming, you can learn Python, the number one language for data analysis and Data Science work. You might consider either taking online courses, which might be costly or becoming a Data Analysis Consultant at The Data School with intense exposure to Data Analysis for the first four months. You even can find your path of becoming a data expert.

To apply to The Data School, it is worth mentioning that you do not need to have your resume. You have to be passionate about the data, create vizzes in Tableau for your interview, be creative and make the story out of your chosen data.

So, this is my story. What is your story? Share it in the comments.