It has been two weeks since the Data School Down Under started the cohort DSAU11 for nine Analytics Trainees. Yes, it is not a typo, this time 9 brilliant trainees successfully presented their visualizations for the first and second interviews. Unfortunately, we have not met offline yet due to the pandemia. However, we were introduced online to each other on the first day of our journey, and we met our coaches. The first week was dedicated to Alteryx Designer and the second to Tableau.

The first week:
As it says on the Alteryx website, the Alteryx Designer is “The leading solution for data prep, blending and analytics, with drag-and-drop capabilities that speed up every step of the analytic process.” A Data analyst develops a project in Alteryx similar to the lego-like concept by dragging and dropping so-called tools into the canvas. Tools are coloured in different colours with a schematic picture on them. Each construction block has its functionality, for instance, join or union datasets. Furthermore, blocks are logically connected on the canvas forming flows. It is worth mentioning that tools are grouped into the Tool Palettes by their functionality. The Tool Pallet can be, for example, Transform or Preparation, so it makes it easier to find a tool you need.

The main idea in Alteryx is to build a flow in such a way that extracted datasets from different sources such as files, databases or even the Internet can be cleaned, joined or united together and undergo other transformations. Data, after all, is investigated and valuable insights are found. Finally, the prepared datasets are passed to Tableau for visualization. 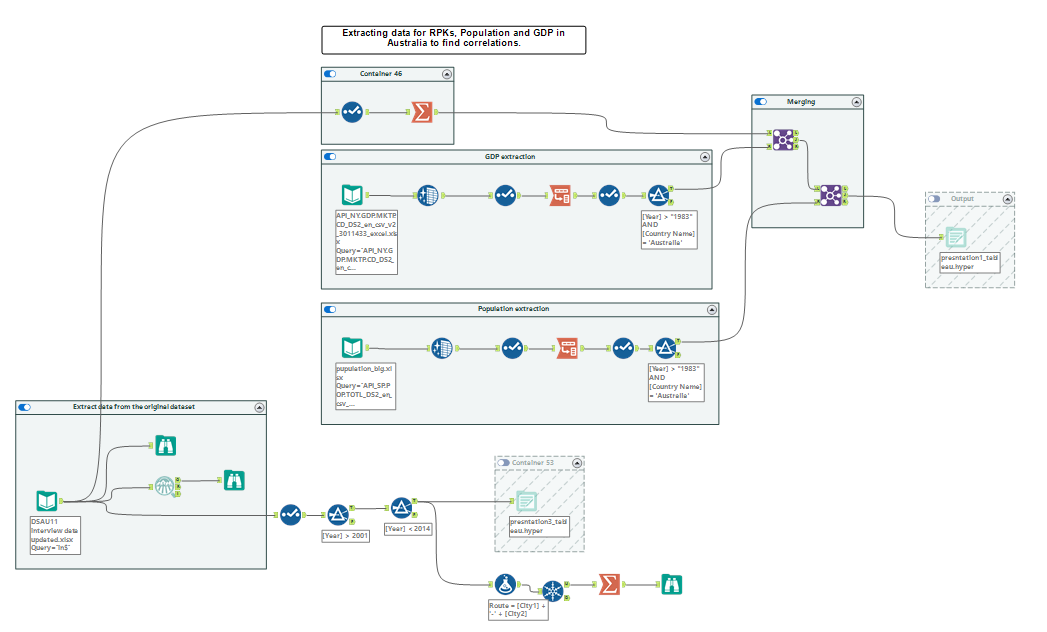 Our Alteryx Designer coach was Sean Buckley. His course was very intensive. He showed us examples on different topics, and we tried to follow him. Even though if someone missed something, we could always ask Sean for help as well as we were given a well-written manual to refer to.
In addition, we learned the Advanced Alteryx Designer course with Natalia Miteva. She covered advanced topics such as Fuzzy Matching, for instance.
Finally, on Friday morning each of us prepared a presentation and showed it Friday afternoon.

The second week:
This time David Bartolo introduced us to Data analysis. He showed the main concept, some tips and tricks. Then, Sean Buckley taught us Tableau. It was an intensive course again. This time for each theme he showed an example, then it was a “follow me” session where we followed him trying to do what Sean was creating on his screen. Finally, we had our exercise to solve with his help if needed. Again we were given a well-written manual to refer to. Sean covered introductory, intermediate and advanced courses of Tableau during the second week.

It is said on the Tableau website that “Tableau helps people and organizations be more data-driven”. This state of the art software helps us to create outstanding interactive visualizations. Then, we put visualizations together on dashboards and, after all, made a story. After that, we are ready to convey it to stockholders and clients.

On Friday, we prepaid presentations again and showed them on Friday afternoon.

To sum up, during the first two weeks we learned two powerful software. We learned a lot; however, we still need to practice and gain knowledge. So, we have 14 more weeks to develop our skills!