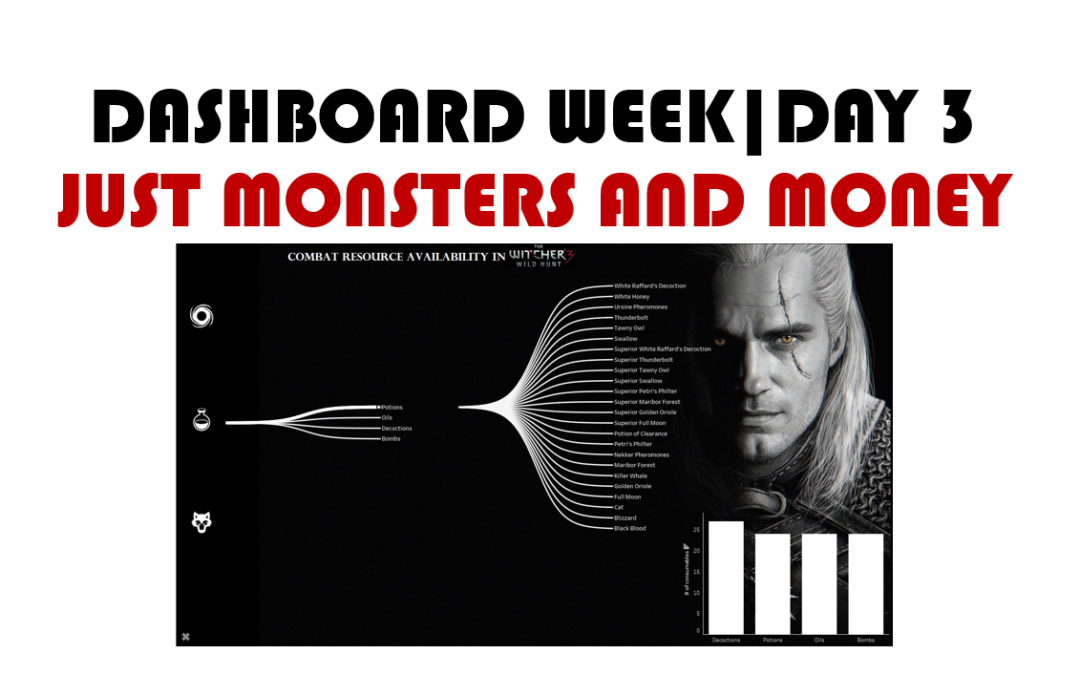 We are halfway there and it has been a tough week so far. Every day presented a new set of challenges to overcome, and today was no different. I was initially extremely excited about the topic as I have a great interest in it. But little did I know how tough the game was going to be. One thing I must say, due to the fact that I love this topic, I was more willing to stay up a bit later (midnight) to get something done. So, what was the challenge all about?

The challenge today was to use an API to gather some data on Gaming. There were no limitations to what you could pick. You could pick your favourite game! This was so exciting! It all sounded so wonderful! Until I got to work. There were so many challenges that I started pulling my hair out by lunchtime. Where to begin. First of all, we had to set up an account to get the API key, none of my three emails worked. I had to borrow someone else’s key. Next, the API had a limit per user, and we all reached that limit by 2 pm. BY this time I still had no data to work with as there was another challenge. The data was so bad, most fields had 80% or more NULLS which is absolutely useless. It was probably the hardest day of my Data School Training to date. I had to make a plan and get something done. So I improvised!

I ended up using the API as a guideline of what my viz will be about. As most of the columns were nearly empty, I had to source data from loads of other sources as well. For example, the API could give me the four main characters of a game, but if you wanted them all you had to go and search for more data. This is exactly what I did. I used the API to extract fields that I was interested in and then supplemented my fields with more data points. My Alteryx workflow is thus very confusing, which is why I won’t show you what it looks like. I will however show the workflow for the data transformation to build dendrograms. In the end, I had a few separate data sources that I imported into Tableau and used relationships to bring it all together. The reason I used relationships and not a flat-file was because the data I extracted was of different granularities. 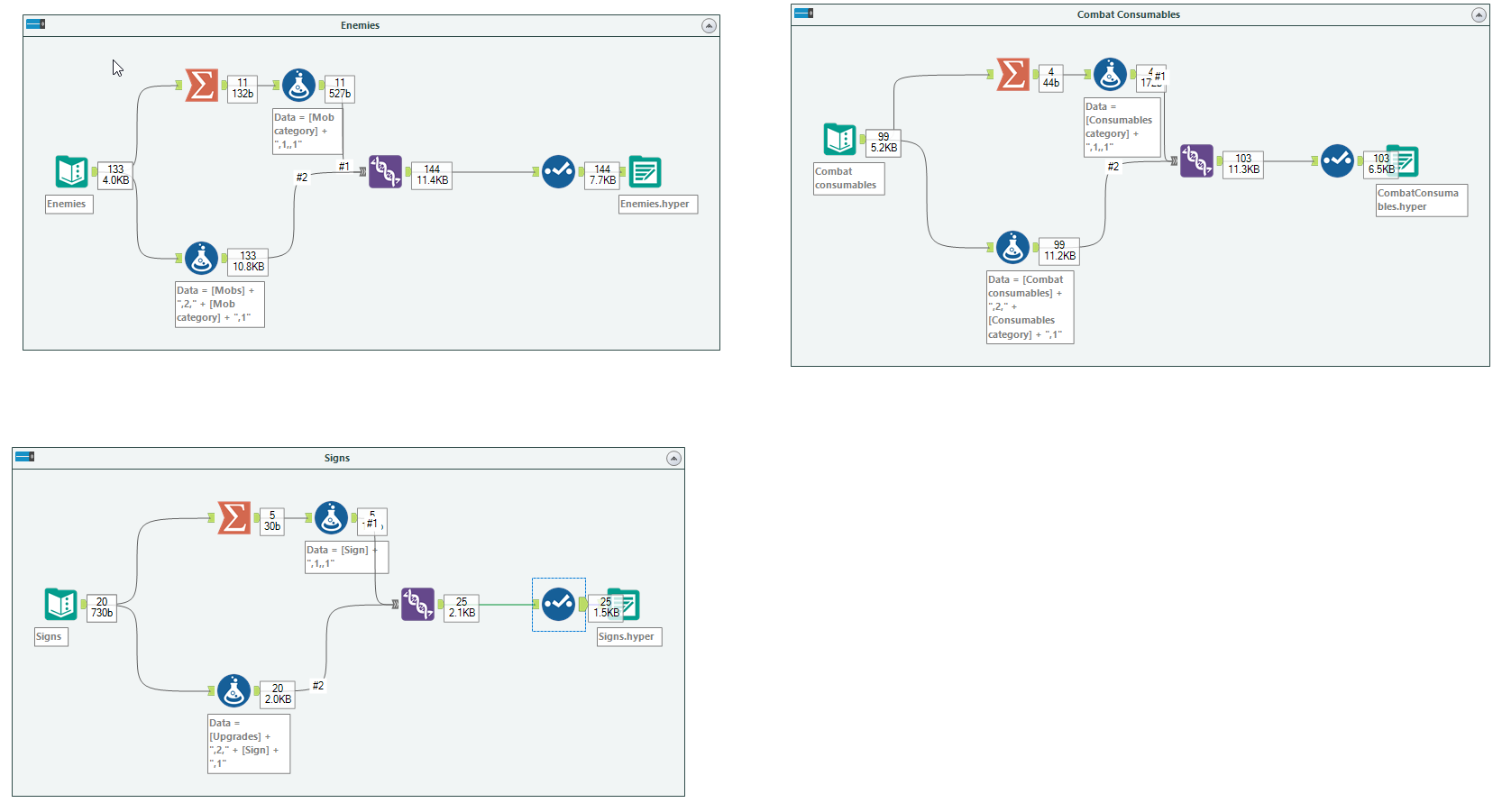 The viz that I built is not quite a finished product as I did run out of time. It serves more as a proof of concept for now. I will definitely come back to give it more attention after the hectic week that is Dashboard Week. I chose to make a viz about my all-time favourite game, The Witcher Wild Hunt. I started broad, showing The Witcher franchise (all the games) and compared it over years to the number of games released and the number of platforms utilised. On the side, I included a picture selection so the user could click on a game and taken to a new dashboard that drills deeper into that game. At this stage, I only had time to incorporate one game as a proof of concept. The Witcher Wild Hunt game will take the user to the next dashboard witch is an interactive view of the combat resources for the game. I made use of dendrograms, which I learned to build today for the first time by making use of this blog. Basically, the user can pick on a resource type (enemies, magic or combat consumables) which will then drill down to the next level of categories and then again to the next based on your category selection. Additionally, I added a sheet swap chart box in the bottom right corner to display the number of items in each category.

The idea of this viz is not to show data analytics but more of an exploration of the game. 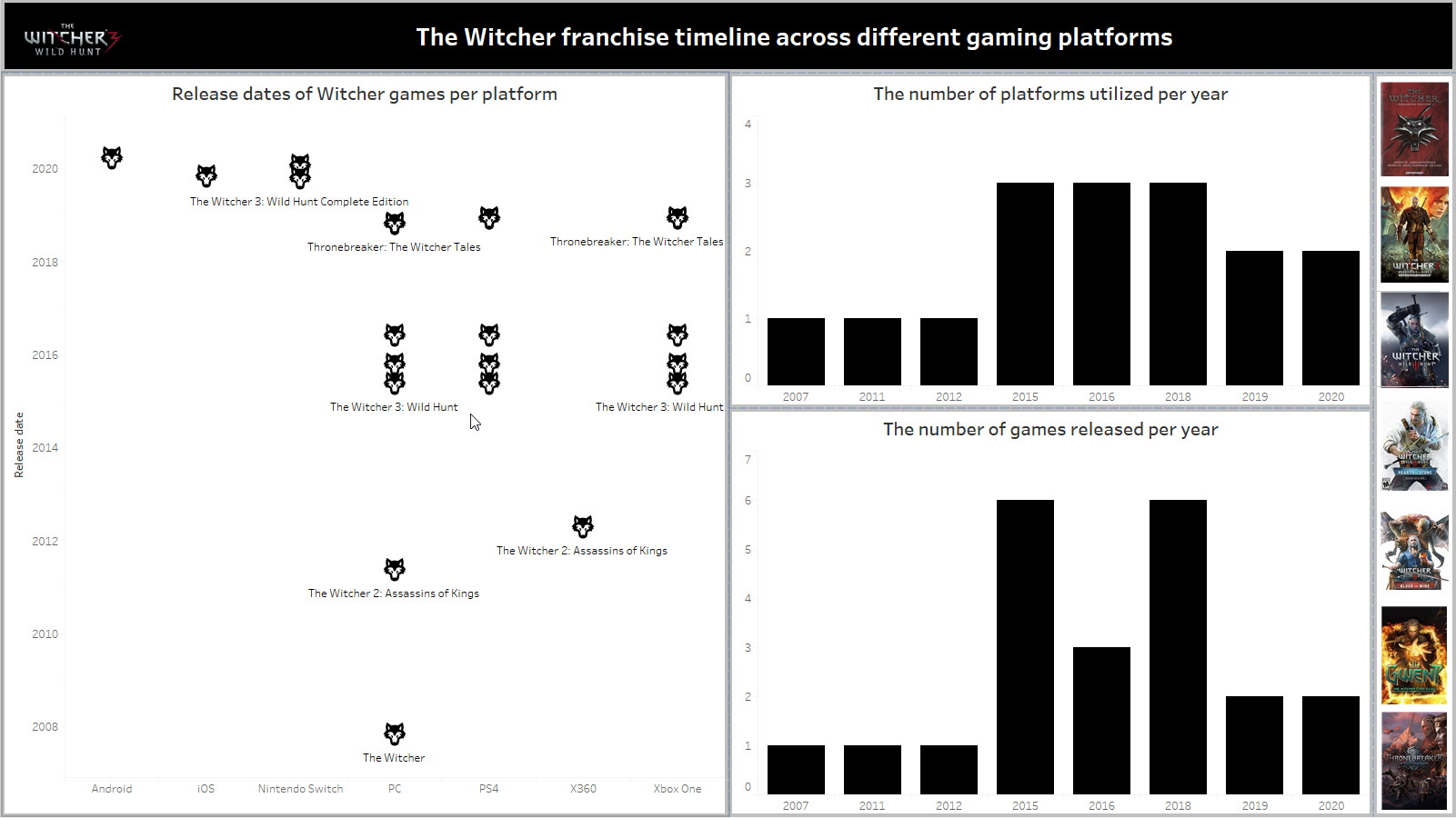 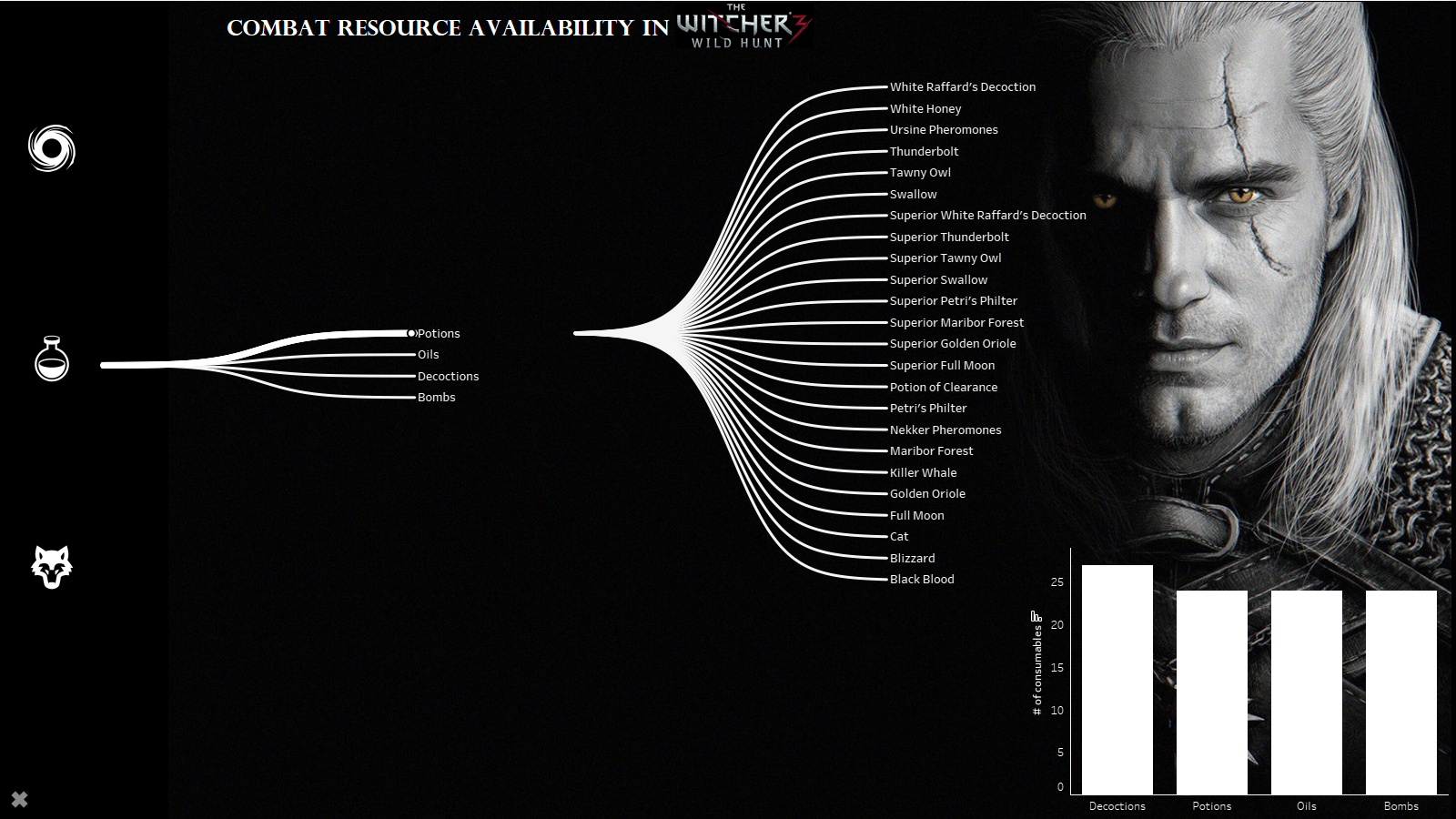 I might not have finished my viz, but I found something that I would like to continue working on after the week is over. Dashboard week is a learning experience, and in my opinion, you learn more during failure than you do in success.

Stay tuned for Day 4 of Dashboard week and keep vizzing!

Charisma has an interesting background in animal science, having completed a Master’s degree (MSc) in Zoology at the University of Pretoria, South Africa. She found her passion for data analytics through her scientific studies. She was delighted to discover that The Data School provides a means to follow her heart and enter a career in data analytics. Charisma is a loving mother of two ferrets and has discovered a talent for abstract and realism painting in her spare time. If Charisma had to choose only one food type to eat for the rest of her life, it would be sushi. Charisma also enjoys outdoor activities including fishing, camping and hiking.