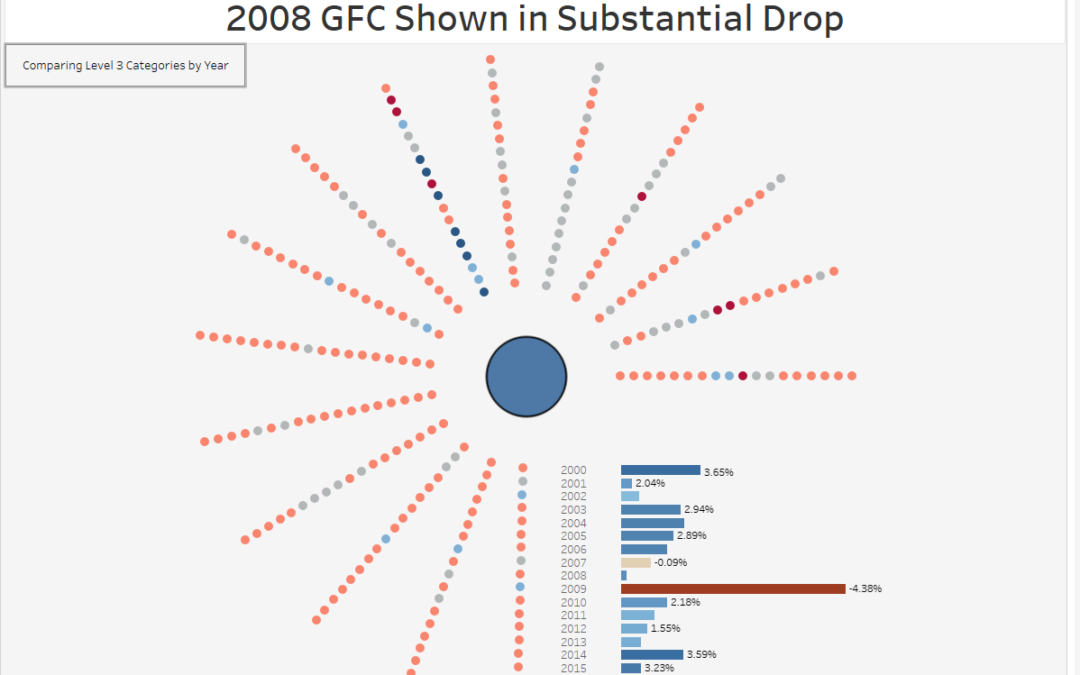 Day four of Dashboard week saw DSAU5 working with US Consumer spending between 1959 to 2018. The data provided an eight-level hierarchy and our challenge was to firstly clean the aggregation in the data, normalize the data, and as always make an interesting story out of the data.

Cleaning the aggregation had a level of interpretation, which forced group collaboration between the group early on, while also needing to decide which inflationary numbers to use, and the best approach for comparison. I decided to aggregate the data to the yearly level. In our normalizing discussion, discounted methods were proposed, but I went ahead with creating a real growth rate, but reducing a calculated growth rate from us spending, and subtracting the yearly inflation rate. I went ahead with this approach because what I wanted to focus on was trends between years. The following Alteryx workflow was used to create this real growth equation:

This process was repeated for both the yearly grain, and level 1, 2 and 3 grain, but for my final visualization, I focused on the level 3 grain. I also found some population statistics to incorporate population growth and subtracted that from the real growth rate. This was done in the following process before the subtraction join:

With Adjusted Real Growth Rates, the most suitable chart would be a line chart, but even so, I decided I wanted to do something different, so I went to google and searched for “Cool Line Charts” for instance, and found a blog by vizzing data http://www.vizzingdata.com/visualizing-radial-time-series-data-to-uncover-patterns-in-tableau/. I found my inspiration.

I followed their general steps to creating the chart but got to a cross-roads. Firstly I had negative growth rates and secondly, I wanted to show my data at a yearly grain, and at a Level 3 grain with the growth rates, and quite frankly it was a little hard to see the patterns. So I decided to make the graphs changeable using parameters: i.e.,  instead of having the Year(Year) and Level 3 in the separate equations, I created 1 parameter, and 2 equations for the interchanging of that parameter to swap between the dot columns being years and level 3 category. In hindsight, I see this chart to be very effective if you had 6 – 10 categories, but I had too many which made comparisons much more difficult. I decided to create custom bins to use in color to make the comparisons more visual, but I can see now why messing with position and size is usually a bad idea in visualization with many categories.

Unfortunately, when my parameters were made, there was a critical problem: the gaps were not in the same position. So, the only solution I could think, where the floating object in the view will be the same as if I made 2 sheets. I could then use parameters potentially to swap between the sheets, but I decided to go back to Tableau basics and use a button to swap between dashboards, to make the appearance of a changing sheet.

This graph looks very interesting and unique but I can never see myself using this chart in a practical application. Nonetheless, I feel for this instance you can derive some value in the colour and supplementary bars. After all my hard work in the day, my dashboard ended up looking like; 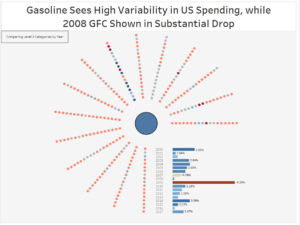