Finding the next Cohort

When I visited The Data School in London in early May of 2018, #DS8 had only 5 weeks remaining of their 16 week intensive upskilling in all things Tableau, Alteryx and data consulting. 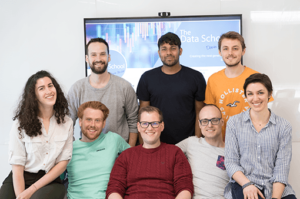 The UK team had therefore been been busy gearing up for the next Cohort #DS9 – which was due to commence in June.

As it turned out, when i arrived in London the closing date for all applications for the June cohort had recently come and gone, and Andy and the team had since shortlisted over 20 of the best submissions to progress through to the next stage of the process. The really great thing about the selection process is that it does not involve CV’s, and references, and reviews of backgrounds and experience.  It was all about how passionate the candidates were about data, and how keen they were to learn and improve!

The best way to for candidates to show their passion and what they’ve learned, is via a demonstration.  The process involved Andy sending all the candidates a dataset, with instructions to prepare something special, publish it Tableau public, and get ready to come and present the dashboard in 7 days time, and also have an interview style Q&A.  The dataset was a history of US rental Evictions.

This photo of Bourton on the Water – in The Cotswolds has nothing to do with The Data School – but i just had to add it anyway!

Not only was I lucky enough to be in England on one of the best May weekends of weather ever!, but i I was also lucky to be in London on that single day of the DS9 interviews!

That’s right one single day, and over 20 interviews! WOW!   One of the great things about the day, was how fun the team made it.  The interview starts off with a gift of a data visualisation book, and the snapping of a picture of them in front of their viz.  And once they finished with the interview, the candidates were taken into the DS classroom and introduced to the DS8 (and to each other) and had an opportunity to observe, mingle, ask questions etc.  It felt more like a party than an interview!

At the end of the big day, the interviewing team grabbed their notes, the pics and headed to their favourite local pub where they compared notes; discussed and debated; and made a decision on the final DS slots!  The lucky candidates were then made offers in the next couple of days.  Cohort #9 was then announced less than a week later.

Finding the next cohort – Done!