It’s week 14 for our cohort at the Data School Down Under, and only 3 weeks to go to finish our training. This week is very special as it’s “Dashboard Week”. Every morning we’ll be given a challenge and during the day we’ll have to get data, explore it, “massage” it (as one of our coaches likes to say), and create a beautiful dashboard while telling a story. By 9 am on the following day we must have the dashboard ready for our presentation.

Today our challenge was to create a dashboard using the American Housing Survey Data. In the post below, I’m going to explain the steps I took to create it.

My first step was to go through the documentation and explore the 4 data sets (Housing, Mortgage, Person and Project) in Alteryx, so I can decide which ones to use.

The column names of the data is a question/response and each row is one responder. As the column names and responses were codes and numbers, I decided to pivot the data and join it with a lookup table, so it’s easier to explore. For this, I used Alteryx, and below is a screenshot of the workflow. I repeated the same for the 4 data sets.

After pivoting the orientation of the data sets into one long table (which Tableau likes to read) and joining the data with a lookup table, I imported the new data set to Tableau. I had 3 major columns at that point: the responder id, the question/topic and the answer.

Below is a screenshot:

After exploring the data, it looked like most of the columns contained categorical nominal data, so this was going to be limiting to me in the cisualisation.

Before building anything, first, it’s important to select only the data that you need, based on the story you want to tell, and second, make a draft of the dashboard. After going through the columns and rows of all 4 tables at least 3 times, and after trying unsuccessfully building something on the go, I decided to take a step back and do the proper thing.

I decided to use only the Persons and Mortgage tables, to identify if there were any common characteristics in mortgage by demographic group. One of the findings was that a person in their 20ties is more likely to be paying a 4% interest, which drops to 3.5% for 30+ age categories.

In order to have the desired layout, I had to pivot the orientation of my two tables back to a wide table using Alteryx, and I joined them on the responder identifier. 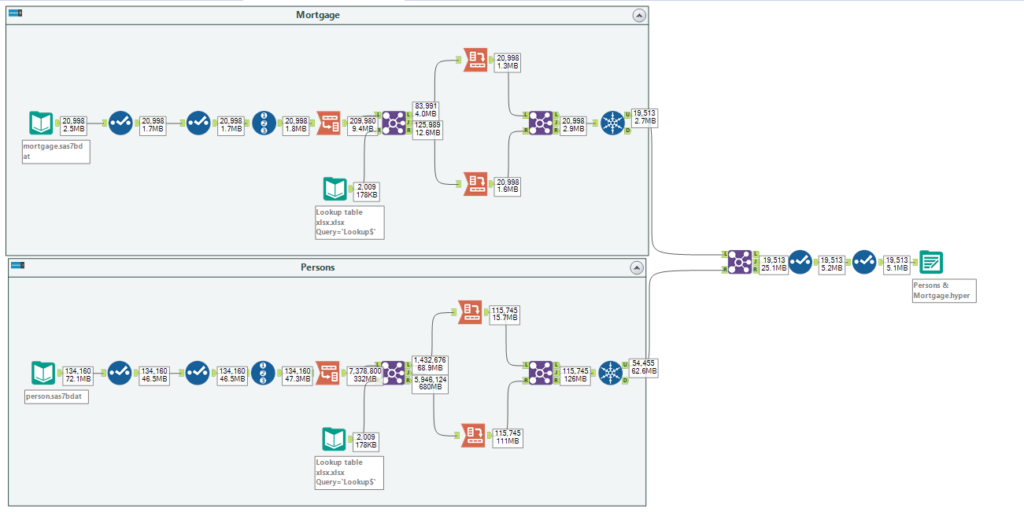 And finally, one of the most exciting moments arrived. I built the charts that I planned in the previous step and brought them all together in a dashboard. I formatted and coloured using some of the colours on the website of the US Census Bureau of Statistics. Check it out on my Tableau Public Profile. 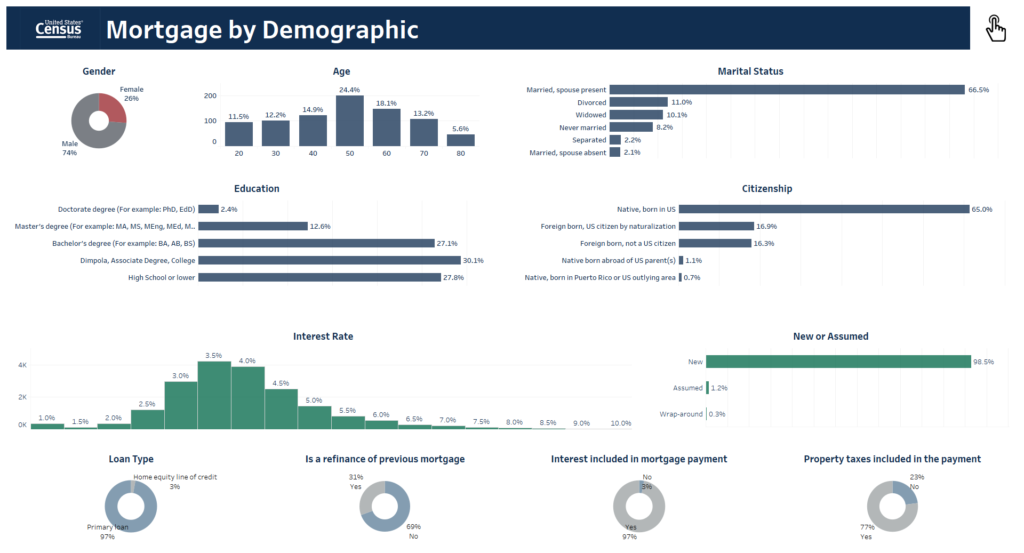 Click on the screenshots to view the viz in Tableau.

Looking back, I should have spent less time choosing the data fields, exploring the data and deciding on the story. The time is limited and it’s important to timebox and finish the tasks on time.

But guess what, lucky me! Tomorrow is another day where I’ll get the opportunity to put this advice into practice. Stay tuned to see what’s next, and if you have any questions, feel free to reach out on social media.