5 Tips for applying to the Data School 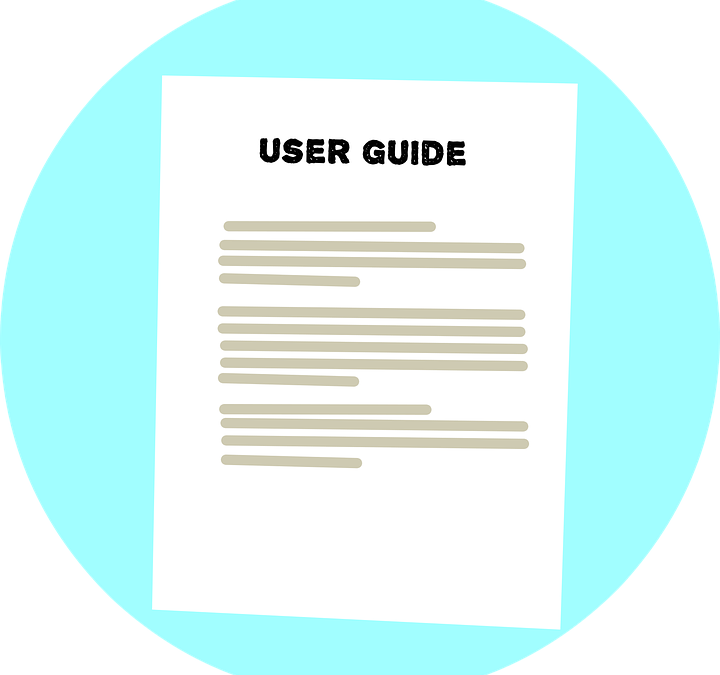 I’m one of the new Data School Australia’s 3rd cohort. My name’s David, and honestly, I am so glad I got into the Data School. Everything I’m seeing tells me that this is going to be a golden opportunity, and if you’re looking at this, chances are you’re thinking the same.

At least, it doesn’t matter too much.

Particularly for the first vis, me and the other third cohort members differ wildly in size. Some people have as little as three or four graphs, but use them very effectively. Some have a half-dozen pages, with a single chart or graph on each one.

On the other hand, for my vis? At the most conservative of counts, my vis includes EIGHTEEN different charts and graphs. Granted, a good half of those are bar graphs, comparing simple statistics from Emerton to Australia, but it’s still a very large amount.

A good half of them are simple graphs like these three, but still…

Both are fine ways to handle your vis. It’s more important that each one helps tell the ‘story’ of the data, rather than meeting some illusory quota or squeezing everything you can into one page. Anyone can demonstrate that you can make bar graphs and pie charts and tree maps – what matters is if you can use those to tell them why sales are down (or up!)

#2: Use this blog for Visualization Ideas…

And the Data School UK blog, too!

Tableau is a powerful tool, and there’s a lot of things you can do with it. But there’s a tool just-as-powerful at your fingertips – the Data School blogs, both for Australia and the UK.

As part of our course, we’ll do a lot of these blog posts. And one of the things Data Schoolers love to do these on is making unique and unusual graphs and charts. Calendars, Donut Graphs, Butterfly Charts… there’s a whole variety of them. 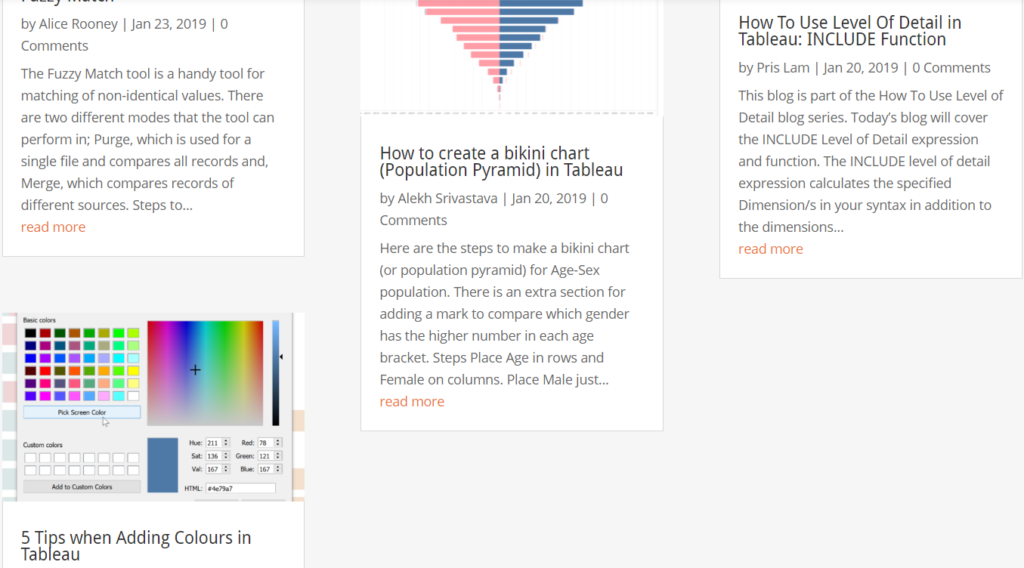 I recommend looking at and trying at least one of these graph styles, and looking at the other tips, too. They add a little more visual flair than your average graph, and it’s a fun talking point to bring up to someone reviewing your graph.

#3: …But don’t sacrifice Information for Style.

A picture is worth a thousand words. Don’t waste any of them.

What looks good as an image doesn’t always look good as a graph. What matters most on a graph is that anyone can look at a graph and understand what you are trying to tell them with it.

Let me use some examples, from an older version of my Emerton Demographics study: 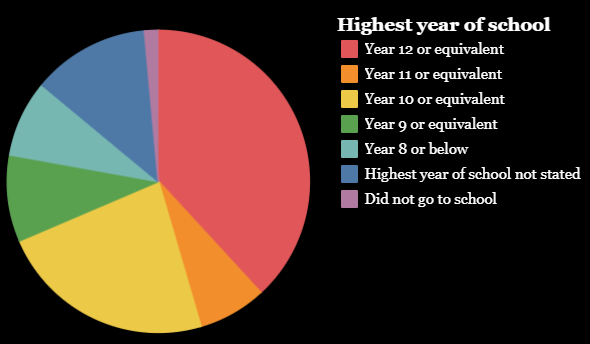 So pretty! But actually, pretty useless.

At a glance, can you tell which of the Year 9, Year 8, and Year 11 slices is the biggest, and which is the smallest?

Sure, the colours are pretty. But they don’t mean anything important, and it’s hard to tell the exact size of each slice. Generally, pie charts are a lot less liked than you might actually think, for those exact reasons. Here’s a better chart below, using the same data.

Now can you tell which one is bigger?

Remember, you’re a data analyst first. Style is good – it can help your vis stand out in the crowd, particularly if you add your own visual flairs. But don’t sacrifice the story you’re telling for the pretty pictures.

Personally, I recommend the bystander test. Show a friend your vis, and ask them if they get what it’s saying. If they can’t figure out, without your help, what your dashboard is trying to communicate, you need to improve it.

#4: Build it fast, and revise it faster.

Show you’re keen for the school!

I sent my first vis in pretty late, Friday night, February the 8th. Craig was kind enough to give me a detailed review the next day, and I was eager to get in a revised version – with his recommendations included – before the deadline.

The deadline was the next day..

I ended up skipping my usual Sunday night hangout, but I managed to get in a revised version, with all his recommendations accounted for, AND new charts on it in time. And I think that left a clear impression of being eager – even though I was relatively late to the party, I was clearly ready to put the effort in to catch up.

So I recommend iterating on your vis as soon as you can, after you’ve submitted it. It’ll make a good impression that your very eager to impress them.  Please don’t submit as late as I did, though. That was a very stressful few days, and I’m in no rush to repeat it.

It’s the best thing to show you’re a ready student.

When we got our second data set, it came with a bunch of links. Perhaps most notable is this one, from the original founder of the Data School. It’s talking about how they recommend choosing analysts.

And then I got to this part:

“That’s not what I mean when I’m asking what people are good at. The only acceptable answers are things like this:

What do these seemingly unconnected skills have in common? They all take AGES to learn.”

This is about dedication to learning, and if you’re like me, you probably started to sweat. I didn’t have any skill that I could really say was super impressive. The most I had was some well-practised, but rather elementary skills in Adobe Illustrator.

So what could I do?

Show I wanted to learn Tableau.

My first vis looked nice, but it was pretty basic in terms of formatting. With my second vis, I deliberately pushed myself to get even better. I learned how to make custom marks, and whipped up a few thematic ones. Checking the Data School Blog taught me how to make a big custom tool tip. And I tried to incorporate even more skills – how to annotate, how to use a single filter across multiple sheets, and how to use the containers effectively.

Showing that I could improve upon my skills, even in that short time frame, was a big selling point, at least in my mind. At the end of this first week, it’s become pretty clear that we’re going to be learning at a breakneck pace. So showing that you want to learn more even without their guidance is something that will stick in their minds.

At the end of the day, getting a Data School position is a lot of work. It’s not just sending in your resume and cover letter, and changing the name of the business. You’re creating something, with your mind and your hands. You’re showing the method in the madness, and communicating that to people who are complete strangers to both you and the topic. And you’re proving you’re not just willing, but eager to learn.

But even a week in, I can tell you it’s so worth it. There’s not just a golden learning opportunity here, but a young and growing global network of Data Schoolers that are all eager to work together. And there’s a growing awareness – and appreciation – of the Data School’s quality of students in the business space. I’ll tell you all as I go how it turns out, but I’m very excited to see what I can learn.