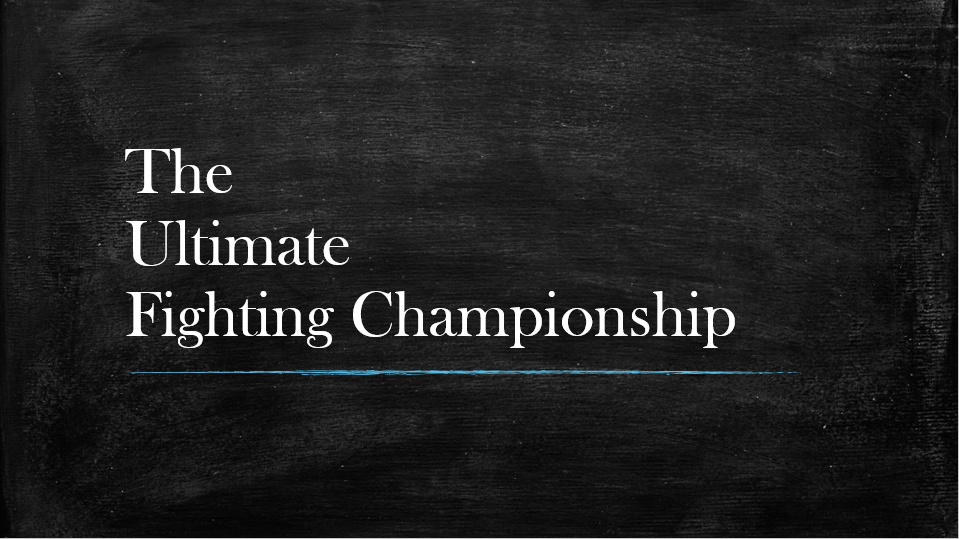 One tradition of the Dashboard Week is actually to work on the same data set that was given to the applicants for their final round of interview for the next cohort. The difference is instead of having two weeks to continuously build and fine-tune the dashboard, we have to produce a final product in just one day, plus blogging about it. Timewise, this is certainly a huge challenge.

The Task and Workflow

The data we have to tackle for Day 2 is about the Ultimate Fighting Championship (UFC), which can be obtained directly from Kaggle. For martial arts fans, this will be an exciting data to work with. Although not technically a huge fan, I’ve watched some UFC fights on Youtube before, so I have a rough idea of how the matches are performed. This background knowledge helped me to quickly identify the granularity of the data, in which each row basically represents a match between two fighters. Also, I was able to quickly understand some of the more technical features in the data like the fighter’s stance, weight class, how the match was won, etc. Here’s a glance of how the data looks like:

Since the data we are given is already very well structured, there isn’t much cleaning required. Hence, I didn’t spend much time in Alteryx and the workflow I created was mainly just to remove some of the unnecessary columns and output the data into a hyper file. Below is a screenshot taken from Alteryx:

Given the abundant features contained in the data set, there are a multitude of angles to analyse it. Personally, I’m more interested in finding out who are the winning fighters, both male and female, and look at their performance during the match. For example, I’d like to see how much time they took to defeat their opponent and how they finished their opponents, things like that. On top of these, I also want to see the location of the matches and the number of matches competed throughout the time period given in the data set.

With these goals in mind, I eventually created the following dashboard, which you can find on my Tableau Public via this link. 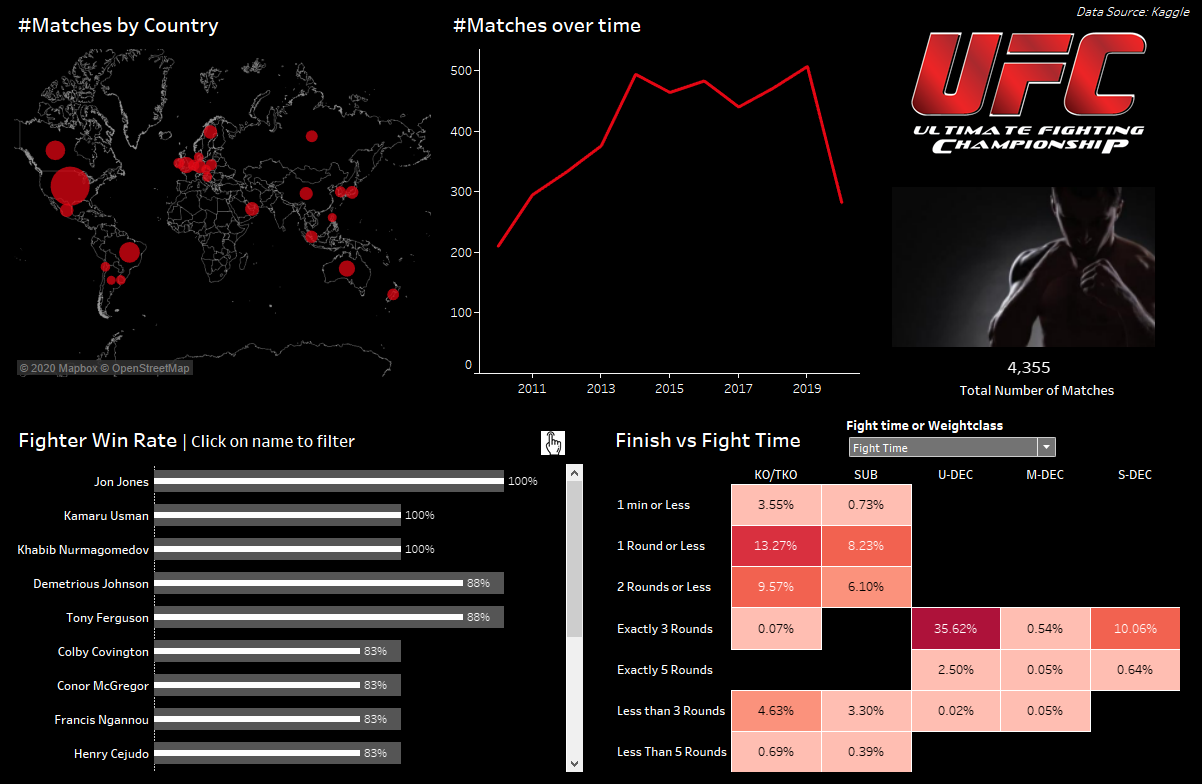 To match the theme of this data set, I mainly used a color palette comprising of red and white. I also used a dark background to increase visual contrast and create a stronger impact on the eye. With this dashboard, the user can click on a fighter and see his/her thumbnail picture, as well as fighting stats related to this particular fighter. To create the thumbnail, I basically searched for the fighter’s photo on the UFC website and saved them as shapes in Tableau, which can then be assigned.

Initially, I had a couple of filters on my dashboard, which took up quite some real estate. A very useful trick I learned during my previous training is to put these filters in a floating container that can be hidden. And the user can pop open the container by clicking on an icon, just like the following: 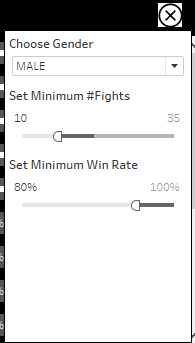 In man’s league, Jon Jones has fought 17 matches and boasts a 100% winning rate. He is a dangerous fighter with exceptional stamina, finishing nearly 19% of his opponents in less than one round and winning all the matches that were played until the end. Among female fighters, only two people are able to maintain an 80% and above win rate. It looks like Amanda Nunes is also a fierce fighter, knocking out or making her opponent surrender almost half of the time.