Monday’s task involved extracting, wrangling and understanding some seriously complex survey data. The entire survey dataset had over 12 000 questions (with that many columns) and over 63 000 respondents (with that many rows). This data was derived from the American Housing Survey 2019 National Public Use File (PUF) which is a government initiative aiming to capture information on the general housing status of USA. Such questions asked include the number of rooms in a household, types of air conditioning/heating, age of the house and many more, all for particular household types across the nation. While investigating this dataset, I came across a series of questions that left me thinking..

I am lucky enough to be considered a privileged woman, and I certainly take many things in life for granted. So, the following questions really jumped out at me; “do you worry about affording food?”, “how many days in the last month have you gone without food?”, “do you experience being cold in the home for more than 24 hours?” and “does your kitchen have a sink?”, I began to wonder how many US citizens are missing out on the “American dream”? What sort of variations in responses would I find by comparing classically luxurious housing lifestyles with those less privileged housing lifestyles?

The challenges I faced while answering these questions were largely data focused. Typically, survey data is structured in a “one row per responder” format, which is not analytically friendly. As such, I had to restructure the data in Alteryx from ‘wide’ to ‘tall’ using the transpose tool. At the same time I specifically chose fields that I wanted to examine and create my story, so as to limit the time it took to work. Identifying what each of the questions being asked were and matching them up to the correct fields in the dataset was also a challenge, as the PUF was in many different formats and available in different tables. Finally I re-aliased all the fields within Tableau to be more user friendly, which admittedly could have been done much more efficiently in any other way other that that!

I was able to identify that many American’s do in fact seem to experience the American dream, with most respondents moving to upsize their homes and not experiencing many household issues. However, there were still a number of responders who experienced real hardship concerning their housing arrangements, including almost 10000 people experiencing concerns about food security. Understandably, income played a large role in the lifestyle of the respondents, as well as the reasons for moving unexpectedly. For example, we can see that those who moved for careers had the highest income bracket while those with the lowest income bracket had to move due to household costs. 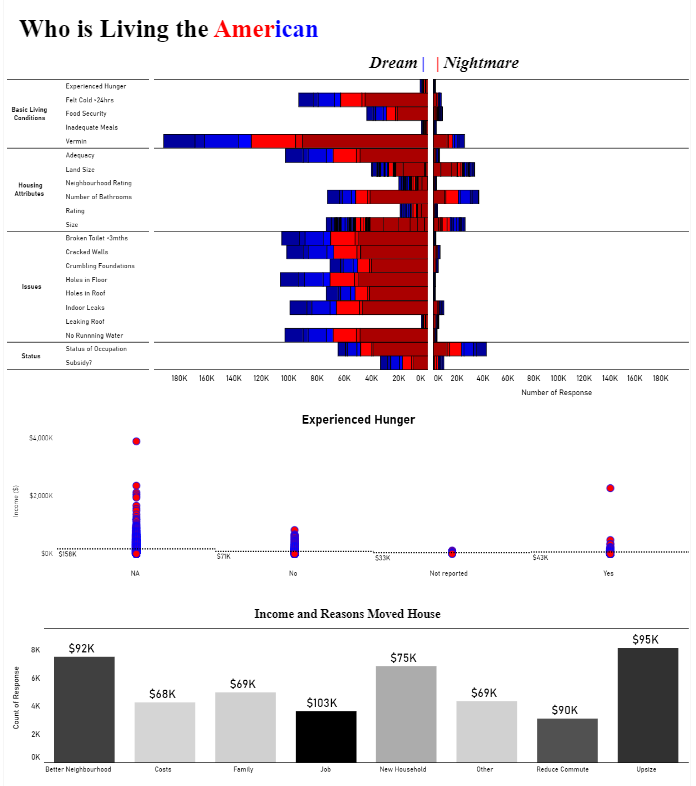 Overall, it is nice to see that the data is supporting the idea of the “American Dream”, but there is always room for improvement!