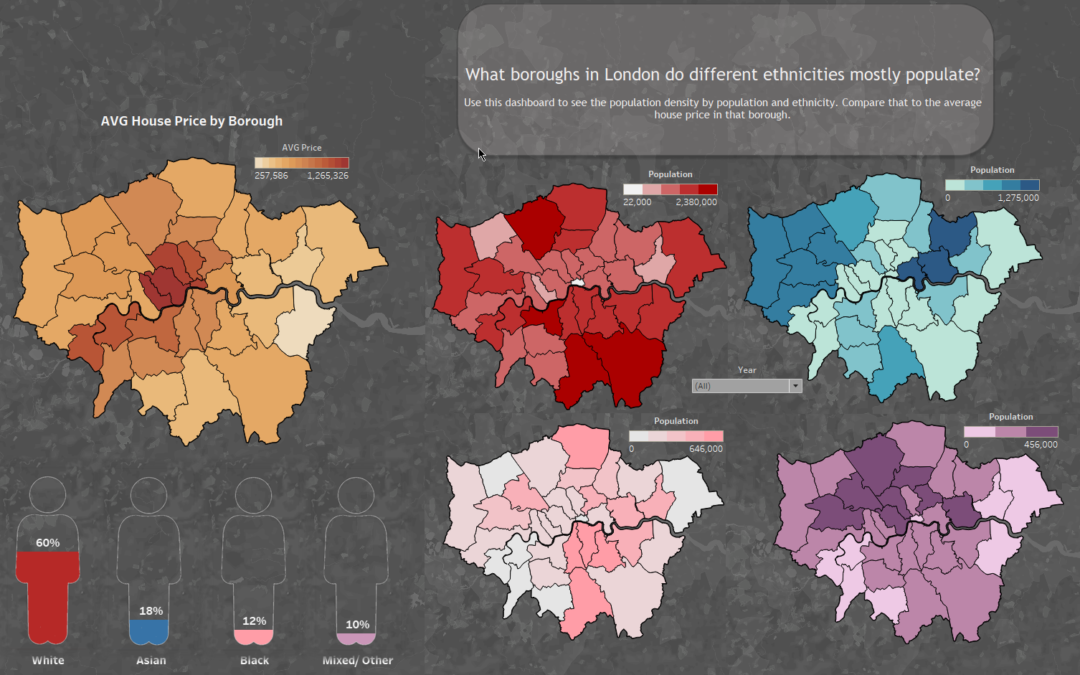 On the third day of dashboard week, the dataset is about UK House Price Index. It is not exciting as the second one we had because this is common data, and many have already made dashboards from it. As always, the data needs preparation before loading it to Tableau, so I prepped it with Alteryx.

The data fields were house price index, average house price, year, and borough. There was one separate excel file with house type, but we could not connect it to the others because there is no common field. The data is insufficient, so I combined it with an external dataset on the London population by ethnicity I extracted from London Datastore.

When I went through the ethnicity data, I considered visualising how different ethnicities are grouped in certain areas and comparing that to the average house price per borough. I discovered how nationalities are grouped in certain boroughs and wondered why this happened. I can conclude that it has something to do with a person’s salary as to why they live in a borough that is above or below the average price, but there could be more factors that influence certain groups of people to live in that area.

I found data on the salary gap between white and all the other ethnicities, but I did not have the time to prep that and combine that with the others, so I stopped and began designing my dashboard instead. I hope you find something interesting about this!

Jimrey worked as a finance officer in the Philippines before he came to Australia in 2019 to continue his studies. He has a background in Business Administration and Information Systems. He researched how organisations leverage data to create business decisions, in which inspired him to pursue a career in data analytics. In his free time, he trades short-term with oil and invests in ETFs. He enjoys riding his bicycle during weekends, going for a bushwalk, and swimming in rivers and sometimes on beaches.