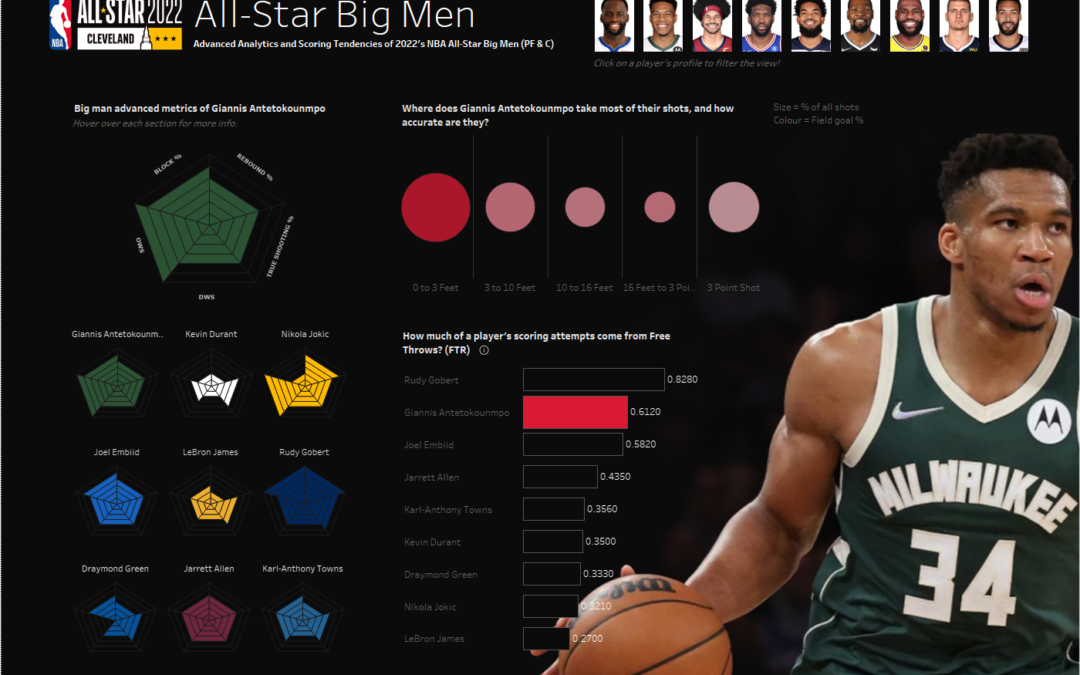 With the NBA’s All-Star break being held over the past weekend, what better time to dive into the analytics of some of the All-Star selections. Comparing players that play at the Power Forward and Centre, traditionally basketball’s ‘biggest’ positions, we can see which All-Stars follow the traditional role of a big man in posting up and rim-protecting, and also those whose play styles offer something different. Here’s my process of data preparation in Alteryx and dashboard creation in Tableau to see these analytics.

Basketball Reference is an awesome resource for NBA stats and allows a deep dive into advanced analytics that can help uncover playstyles. My intention for this project is to compare All-Star big men on relevant stats like blocks and rebounds, how offensive or defensive they are in contributing to wins, as well as scoring tendencies/preferences.

The tables I sourced came from their Advanced section, taking league-wide stats on Shooting, Play by Play and Advanced metrics. I downloaded these as text files and brought them into Alteryx.

For the Advanced Statistics my intention was to create a Sectional Radar Chart utilising 5 different advanced metrics. Normalisation was important in preparation to ensure each section appropriately represented the statistic, for instance, a league-wide average would fill half of the particular section. I used The Flerlage Twin’s excellent tutorial on building Sectional Radar Charts, using their Radar Chart template in the final product.

The Play by Play table included such stats as how much time is spent in each position per player, stats on fouls as well as +\- metrics. It’s preparation was relatively simple as seen below.

The Shooting table again followed similar preparation as the previous two. My intention was to plot a player’s shooting range through a circle timeline (or something similar to), so this required some data manipulation and two exports. 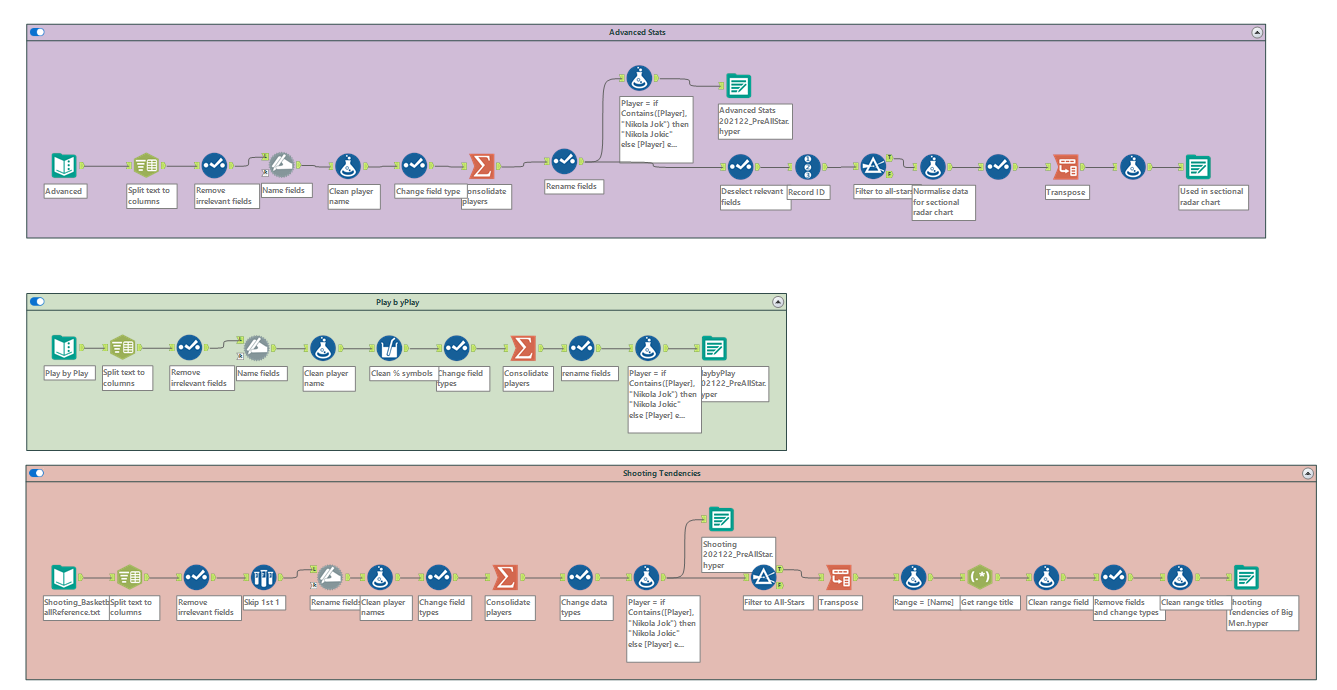 There were a few features I wanted to implement in my final dashboard. The first was a Sectional Radar Chart as mentioned above. These charts do well in sporting contexts, with their overall abstract shapes allowing an easy visual comparison across different entities. Showcasing a player’s scoring tendencies was also important, as some big men are adept at spacing the floor through taking 3-pt shots, whereas others prefer posting up in the paint. I took the idea of a circle timeline to show how many shots they take at particular ranges, and their Field Goal % at each range. By using background images in Tableau, you can also change imagery based on a filter. I thought it would be visually engaging to have a background image change along with the player a user is filtering by.

You can interact with the final product on my Tableau Public! I’ve delved into some insights discovered below. 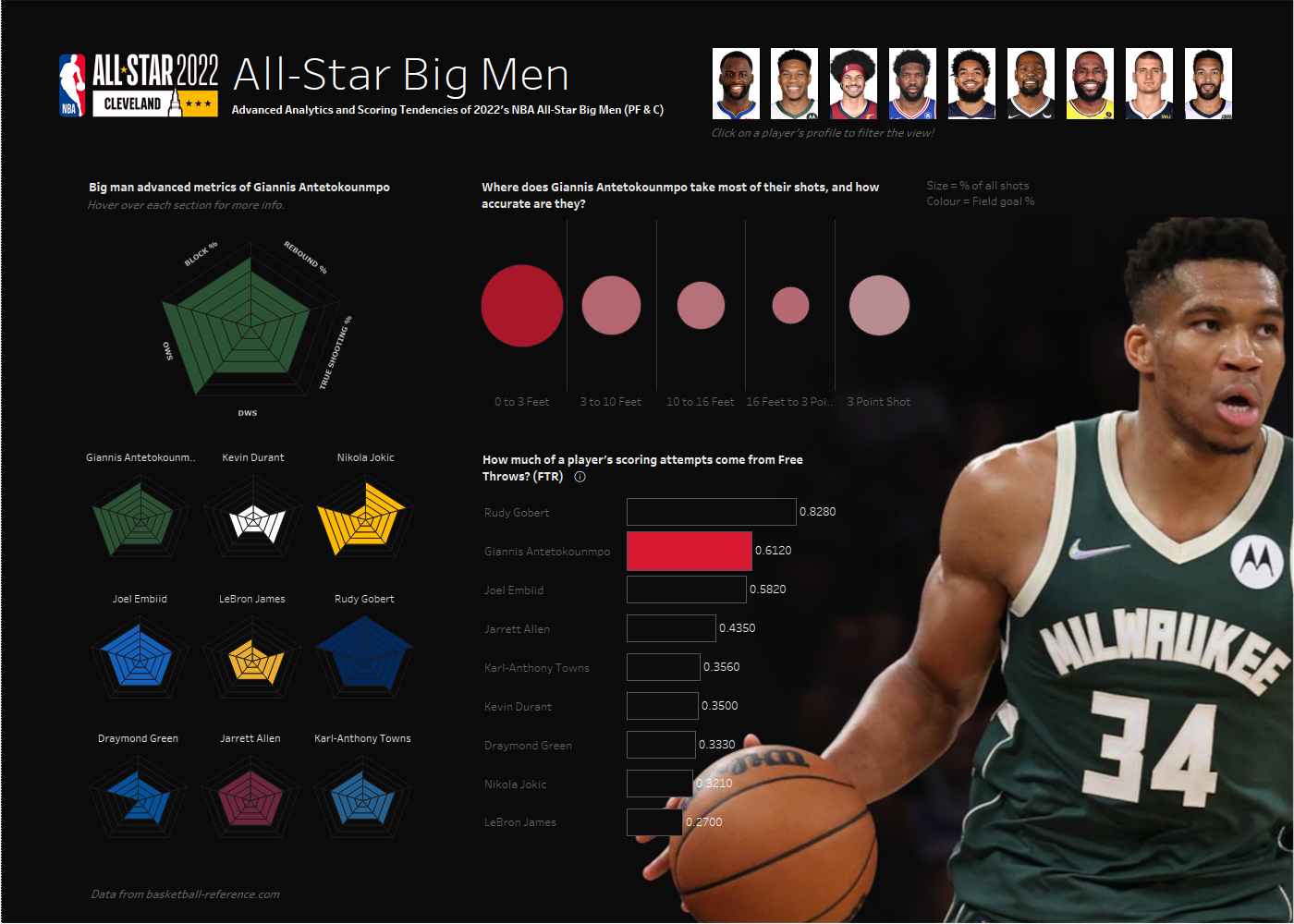 Reigning MVP Nikola Jokic leads All-Star big men in Offensive Win Shares (OWS) at 7.30, and in fact leads the league in this metric. It’s not only indicative of his mastery at both scoring and passing the ball for the Denver Nuggets, but reflects his high workload in generating offense. Despite playing in a rim-protecting position, his poorer athleticism leads to a Block % of only 2.1%. Jokic’s shooting is a strength of his, reflected in his scoring tendencies and True Shooting % (TS%). An adept post-up game and better than average 3-pt shot means that he hardly has to rely on Free Throws to score, indicated in a Free Throw Rate (FTR) ranked 8th out of this cohort at 0.321.

Rudy Gobert of the Utah Jazz lies on the opposite end of the spectrum, having equal highest Defensive Win Shares (DWS) at 3.00 amongst the All-Star cohort (tied with first-timer Jarrett Allen). Advanced analytics shows Gobert is first amongst this cohort in Block % at 6% (6th in the league), and first amongst this cohort and the league in Rebound % at 25.1%! His playstyle relies on a traditional ‘big man’s’ role, camping the rim on both the offensive and defensive end. A little over 72% of his shots come from 0 to 3 feet, and he relies on Free Throws for 82.8% of all his attempts.

Players like Kevin Durant and LeBron James are versatile, and despite having the frame of a Centre, often play as a scoring and play-making forward on both ends. We can see their respective Radar Charts show lower proficiency at the ‘big man’ metrics chosen and both fall within the bottom half of Free Throw Rate (FTR). Where they differ is that whereas LeBron shows a shooting tendency similar to Jokic, Durant shows versatility all over the floor when scoring. KD is known for his mid-range prowess, and it shows, with Durant shooting close to a third of his shots from between 10 to 16 feet at a Field Goal % (FG %) of over 50%.

I would love to eventually incorporate more team data to see how a player suits their team’s playstyle, whilst diving deeper with causal analysis.

Have a dig through the final dashboard and let me know what you find!