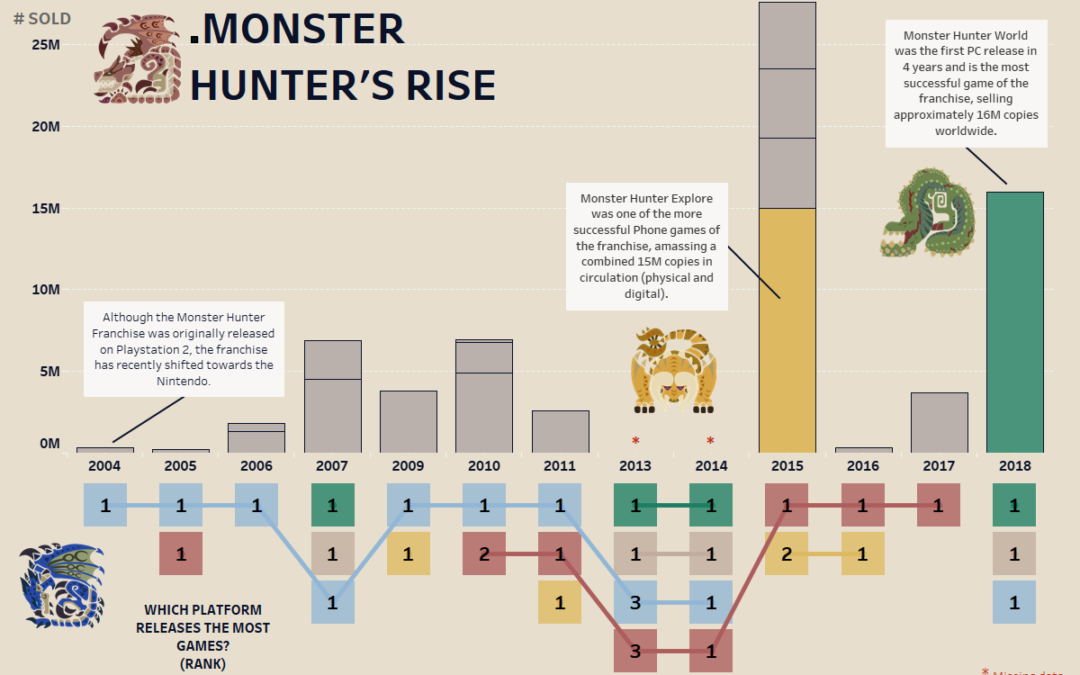 Welcome back to another installment of Dashboard Week. Yesterday was day 3 of dashboard week, and in this episode we used the Giantbomb API as the main source of our data.

For a little context, Giantbomb is essentially a website that has amassed a large amount of information on all sorts of video games. They also provide an API that you can use to collect all sorts of data on various game platforms, or franchises, or individual games. If you’ve seen my Catan viz, then you’ll know that this was an exciting task for me. And so we went about trying to connect to this API and see what stories we could tell about video games.

The API itself is well documented and fairly easy to use. My one complaint is that the information isn’t all located in the exact same place. But overall, getting into the API was as simple as signing up, typing in the appropriate URL, and then extracting the relevant data.

The one caveat is that APIs tend to have rate limits, especially from one IP address. That’s right, a few hours into the challenge we all got locked out of the API for having too many API keys per IP address! Thank goodness for mobile hot-spotting!

After getting another API key and formulating the exact query I wanted, I retrieved all the information I needed on the Monster Hunter game franchise.

Next we had to parse all this JSON format data. Which a lot of people seemed to have trouble with, but luckily for me, I wrote a blog on how to parse data with uneven numbers of delimiters.

Unfortunately, after going through all the effort of parsing the data, it turns out a lot of the fields I wanted were empty. So I scrapped my idea of tracking monster appearances in each game (monster hunter is renown for reusing monsters from previous games). Instead I tried to make a story with what I had.

There was a graph that I thought was cool by Luke Stanke. I thought this could be adapted for my use case so I checked out the video solution. Turns out, there’s nothing to it, just making a line chart, turning into squares, adding ranks and you’re done.

Supplementation of data is always the key to success. It can really solidify your story. So I sourced some info on the number of copies sold for each game release and added them to my dashboard. I would love to say I used another API to get it, but really I used Wikipedia.

For the last two days, the feedback from the coaches (specifically Dave) has been that my dashboards need some instruction or explanation. In the sense that I design them mainly for my own presentation where I explain how everything works. But if you were to see it on Tableau Public, you wouldn’t know what it was.

So in this viz, I tried to add annotations and little explanations on what everything is and what some of the story is.

Check out my Viz here.