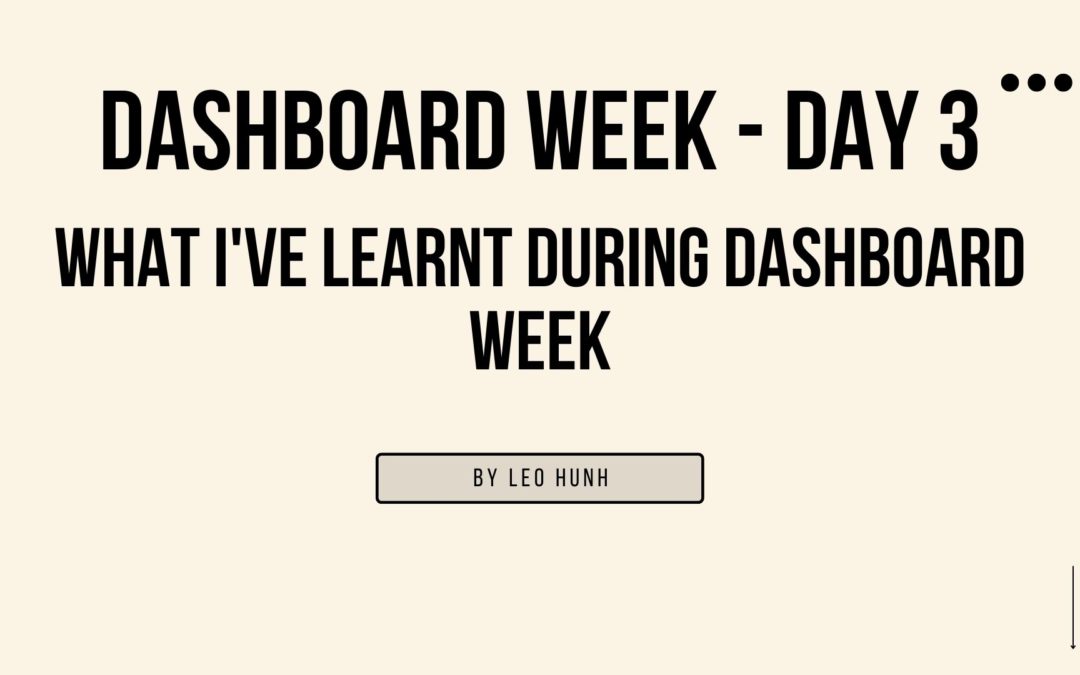 Hey everyone, I’m on my 3rd day of dashboard week and wanted to document things I’ve learnt from the week so far. But first things first you can find today’s dashboard here. There are three main takeaways that I think are important in surviving the week and might be applicable to being a data analyst in the future as well. I’ll be providing my tips as well as some context.

For those unfamiliar with the concept of timeboxing, in short, it is scheduling tasks within a timeframe. This ensures that you don’t spend too much time on a single task. One thing that I’ve realised after applying timeboxing to my day is that you become more aware of how long you take to do certain tasks and what you might need to improve upon. There are certain scenarios where timeboxing might not work as well, which is when Task 2 is dependent on Task 1.

What is MVP? It is the Minimum Viable Product. This is the minimum number of features that your product needs to be considered ‘complete’. MVP is important to consider when you have strict timeframes which is pretty much a single day in dashboard week and only a few hours during the Friday challenge. For me personally, a dashboard that interacts with the measures that I want to show is enough. Often, it’s tempting to add more to your product as you begin to think of new ideas, but you really need to consider the time constraints.

So, this last one is more of a three-in-one, but they heavily overlap so I’ve included it under one. When you first see your dataset and start generating ideas it’s extremely important to note them down. I’ve fallen into the trap of thinking of an idea and then forgetting it an hour down the line. Once you’ve taken note of all your ideas try to collate them into a prototype dashboard. This prototype can serve as your guide.

Finally, I want to emphasise sticking to your plan. Deviating from the plan with such a short time frame can is only a recipe for disaster. So these were some things I’ve learnt during the week so far but maybe I’ll have more at the end of this week. Thanks for reading, have a good day.

Leo did a Bachelor of Science degree in psychology and neuroscience at the University of Sydney. While studying at university, he developed an interest in data science and visualisation. He specifically appreciates how data can be used to inform decision making. During his free time, he enjoys playing video games, cooking, and listening to music. His favourite food is Bún bò Huế (Vietnamese rice noodle dish with sliced beef).