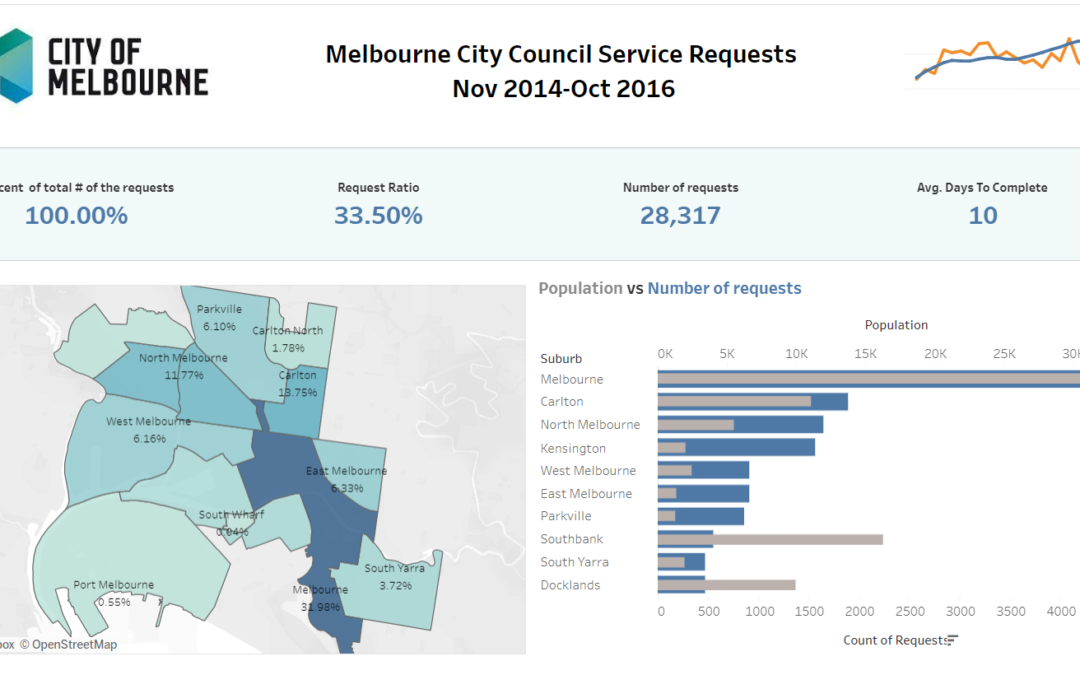 Today we have received Dataset for Melbourne Council Services Requests form data.melbourne.vic.gov.au. We were also asked to enrich this data with some additional information. I have chosen two additional datasets from the same website  to consider the population in the suburbs and types of communication with the council. I have also brought Suburbs boundaries SHP dataset from data.gov.au.

All Data was pretty clean but I had to work a bit on my additional population data in Alteryx, just to bring information I needed.

I then brought all datasets in Tableau using relationships.

We are looking at the number of Service Requests for Melbourne City Council for different suburbs to be able to identify suburbs with the highest numbers of requests and how long does it take to complete them.

Looks like Melbourne CBD has the highest percent of the requests submitted, which makes sense because of the highest population density. Although when we look at the request ratio it’s lower then overall which means that the number of claims per person is not high.  Average number of days to complete the request is 10 days, but the council should pay more attention to Streets and Parks maintenance, where the response time increases. People submit their requests mostly on Mondays and Tuesdays and much less towards the end of the week, CBD is busier on those days.

If we look at West Melbourne area we see a bit of a different picture – percent of total number of requests is only 6%, but the request ratio is 71%, which tells us that there is much more requests have been submitted per person. More attention should be paid to Waste maintenance as the average response days are up to 80 days.

If you want to get response for your claim promptly do not send a mail, email and web requests are also not that efficient. The best way to get a quick result is  to phone or use proactive option. The least amount of requests are submitted through live charts and face to face.