Welcome back folks for another exciting edition of Dashboard Week! Today we’ll be working with a set of fairly regular text files. The twist is that visualization has to be done in Tableau Server — Tableau Desktop is off-limits. Now isn’t that just whacky?

The first challenge today was to figure out the relations between the 13 tables we were given. This took some time but I was able to eventually get the primary and foreign keys straight in my head.

After that, I set about thinking of a dashboard to make. I kept thinking, and thinking, then I saw that several of the tables had a “nationality” column. Combined with the subject matter, it made me spontaneously think of the pun “Race and Nationality”. After cracking myself up something fierce, I decided to set about turning that pun into a dashboard.

The main order of business outside of Tableau Server was to aggregate all the nationalities into a handful of continents. This was necessary at the highest level of analysis, since trying to cram 30+ nationalities into the face of a dashboard seemed like a bad idea.

The Alteryx workflow was a fair bit of manual data entry, but nothing terribly brain-wracking. After finishing it up I set about creating the dashboard. Today I decided to go with a appearance designed to zero in on a single topic (nationalities in racing) and make it as clean and accessible as possible. 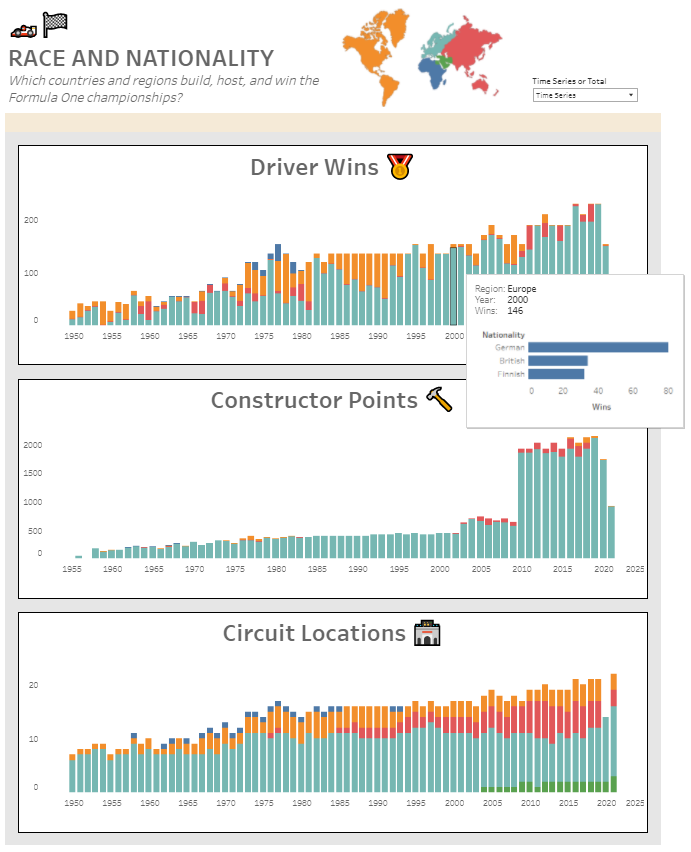 I dare say that I succeeded. But I’ll leave that judgement up to you, dear reader.