Day 4 of Dashboard Week coincided with the World’s Population Day.

We were given https://www.gapminder.org/data/ website to use as a data source and build a viz on whatever ticked our interest. While exploring the countless datasets available I thought it would be interesting to create a viz on Portugal’s recent history. There’s a very interesting story to be told there, in terms of the country’s progress in the last 50 years. I built a more than a handful of charts showing Portugal catching up with its European neighbours in terms of economic development, industrialisation, education and health indexes, you name it, I had it.

However, as the day progressed I realised I had too much on my hands and I was getting further and further sucked into a black hole of line, bar charts and scatterplots, with no end in sight.

What ended up rescuing me was a very poorly designed website – no joke! I was looking for data to build an age pyramid to animate thinking that would be an excellent addition to my dashboard. I took on to Portugal’s Bureau of Statistics website, which is incredibly difficult to navigate (have a look here if you want to remember how the internet looked like in 1999). It took me a lot of effort to dig out the data I was looking for and when I finished cleaning it, I had to take a step back and check if my original idea could still be achieved.

It was then that I realised that there was a smaller take on that story that I was missing completely – telling a story on Portugal’s demographic winter. Since I was struggling to find a compelling storyline for my first idea, I decided to go with the second one, and so this dashboard was born.

One of the rules for today’s challenge was that we couldn’t use Alteryx to clean data. So, I used Excel and Tableau Prep. Yes, I did use Excel. I found out while digging out the data for the population pyramid that it was easier to input the missing values there (since I had to cross data from different sources) and then get it into a nice shape to use in Tableau using Tableau Prep.

My Prep workflow isn’t fancy at all, as you can see:

I used some other .csv tables from gapminder and pordata.pt that I just pivoted directly in Tableau. That was a hidden functionality of Tableau that I didn’t know about until I saw it in a live demo and comes in very handy with this type of data.

Now I had a very well defined idea and storyline for my dashboard.
My favourite non-business dashboards (even if there’s little going on in terms of fancy actions and filters) are the ones where a good story is being told through data using a pleasing design. The simpler, the better. So, that’s what I challenged myself to do with this viz.

Have a look on Tableau Public for the final version. 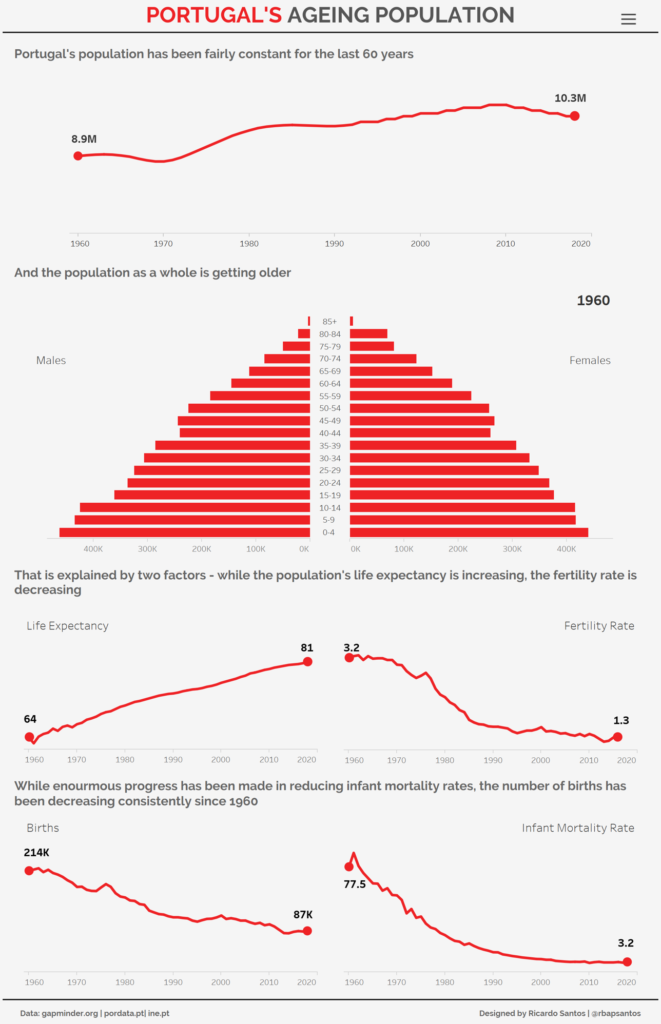 As to my initial idea, I’ll probably get back to it sometime in the future, with a little more time.

All feedback is appreciated.