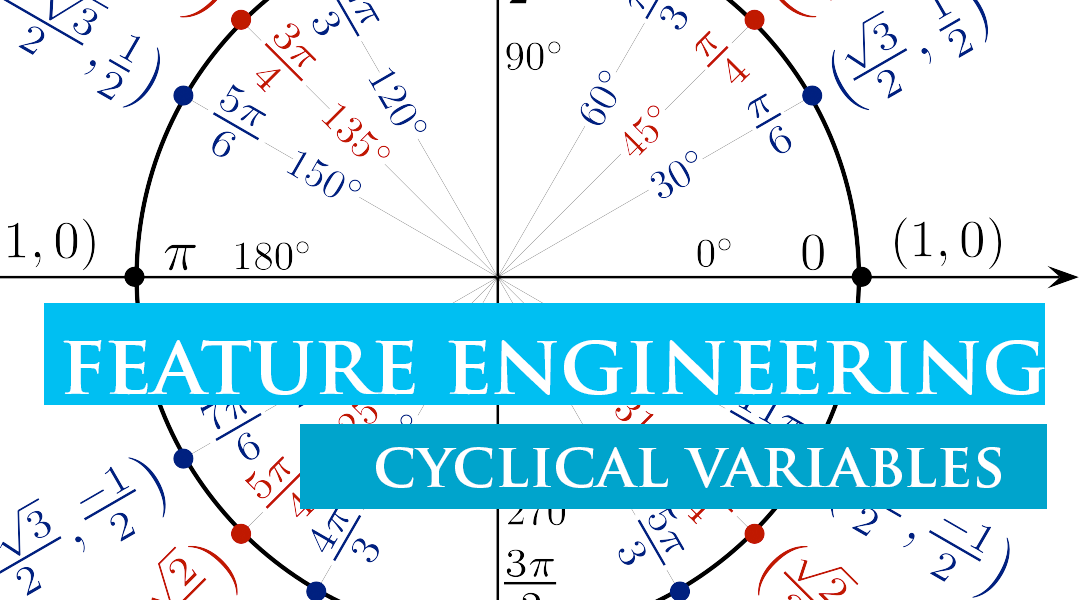 A cyclical variable is a fancy name for a feature that repeats cyclically. I’ll write a future blog post on the importance of feature engineering, but in short, it aims to improve the accuracy of a predictive model. It’s vital to ensure a model interprets cyclical features correctly as the two-hour difference between 23 and 1 would otherwise be interpreted as -22.

Wind direction, seasons, time, days (of a month, year, etc.) are all cyclical variables. A more general rule of thumb is anything is cyclical in real life (wind direction), repeats (seasons) or has an important denominator (days of a month or year). Categorical and continuous cyclical features can be treated similarly.

Here’s the general formula to convert a variable into a set of cyclical features:

Note that this will mean creating two features.

We’ll look at two examples; how this formula works with analogue clocks and then on the more practical application of wind direction.

Let’s look at a 12-hour clock at precisely 6 o’clock (unlike the clock above).

max(a) is 12 as you can’t have a number higher than 12 on your typical clock. It’s important to note that 12:01 am is the same as 00:01, which needs to be taken into account with other cyclical features. If max(a) isn’t the same as 0, then add 1 to the max (see below with the wind example).

Now let’s say my apartment has a north-facing window which I keep open and I want a predictive model for how cold my house will be when I get home. My data shows that a northerly wind will make it cold, and so will a northeasterly, whereas a southerly wind will have no effect. If we number the features 0 to 7, a model will treat higher numbers as having less of an impact based on this data.

But happens when there’s a northwesterly? Intuitively, this would also make my house cold. That’s why we need to capture the cyclical nature of the feature!