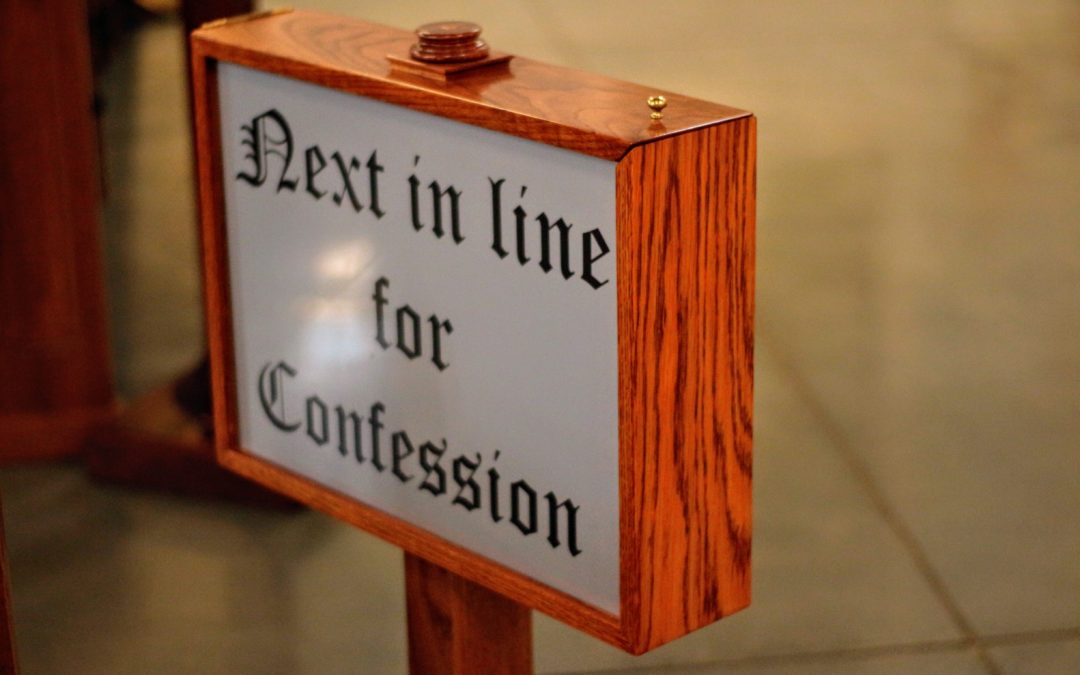 The following seven cardinal sins are often seen in many Tableau Visualisations, and also Data Visualisation as whole. Are you guilty of any? 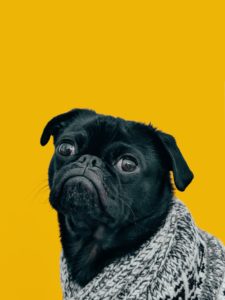 When analysing data, you often would have some precognition about it. Whether you have some understanding or heard about it in the news (ironically has misleading visualisations), it forms a bias of sorts. Having this often gives you a head-start in the direction of which you investigate. But it shouldn’t mean that you should always follow through with it. This can lead to a dangerous mindset in which you try to prove it at the cost of integrity.

Examples include taking out the portion of the results that only matches your beliefs. Changing the axis so it doesn’t start from zero. However, if the main dataset goes against your common belief than that in itself is an insight. This would be actually better because it would surprise and provide more value to people rather than something would be commonly known. 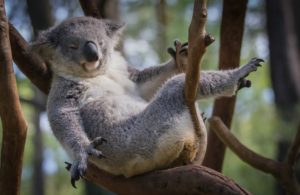 It is often in the little details that define the difference between a good viz and a great viz. Leaving the default tooltips on often results in displaying information that has little to no value. In that case, it would only serve to distract the viewer when they hover over it. Good tooltips however, can incorporate other worksheets and supplement the viz while also saving valuable space or not distracting the audience from the story. There are also actually lot of options relating to tooltips in Tableau, having a separator, making them interactive, images etc. At the bare minimum, you should always edit just before publishing your viz as changing it earlier on means that you will have to adjust everything manually afterwards.

Another important but quick adjustment is formatting your chart. The axis and extra labels can cause extra cluttering and distract the audience from focusing on the actual trends and information.

Finally, it’s a good practice to have a source of where your data comes from. This adds on to the integrity of your findings and calculations. People can check whether you have committed the sin of pride and only taken out what of value to your story. 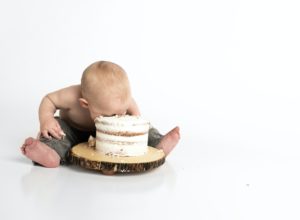 It is often tempting to try and create a dashboard that thoroughly goes through each and every part of the data. However, you must remember that the audience hasn’t had as much time as you working on the data. Having too much info and too many line of thoughts only seeks to distract the focus away from the main insights that you want them to understand. The best way to avoid this is to do some every data exploration and come up with an interesting story about it.

This works especially well if its relates to you personally but even when it doesn’t it creates a narrative that the audience will keep wanting to explore. An example of this can be seen in the sample dataset of the Tableau Superstore data. Of course, you could simply layout the dashboard with charts about the sales and profit ratios. Or alternatively, you could add a personal touch like maybe about how you travelled to another region and was surprised about the prices of certain items. Building a dashboard around the differences in prices for the regions and how it relates to the sales and profit could result in a compelling narrative.

Thinking with this sort of logic also helps avoid including too many charts. This sort of visual clutter and bombardment can be okay if the audience has patience to slowly go through everything and drill down on different graphs. However, in this fast-paced information age, it is often better to get out the message quickly and in a guided manner. 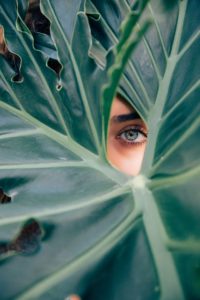 Humans are very visual creatures. So having design elements incorporated into a viz can often make it stand out from others. However, it is imperative to note that if you have taken designs and style from others, you mention them as an inspiration. This is a great practice that only benefits the community. That being said, here are 4 designs from Makeover Monday and Viz of the Day I find elegant and are simple to do: 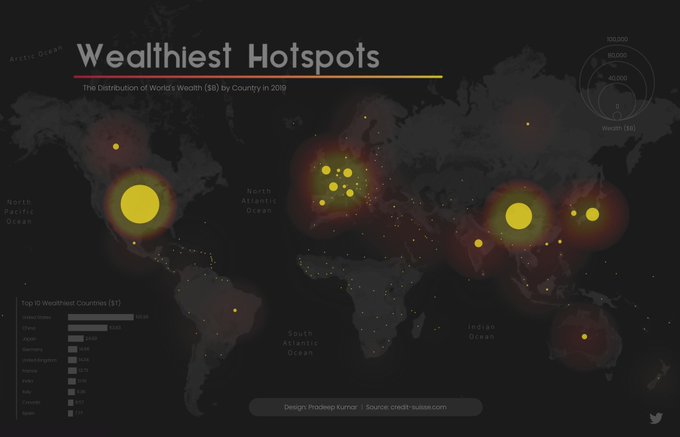 Glow: Dual axis of a circle and a density. Then change the opacity and intensity of the density. 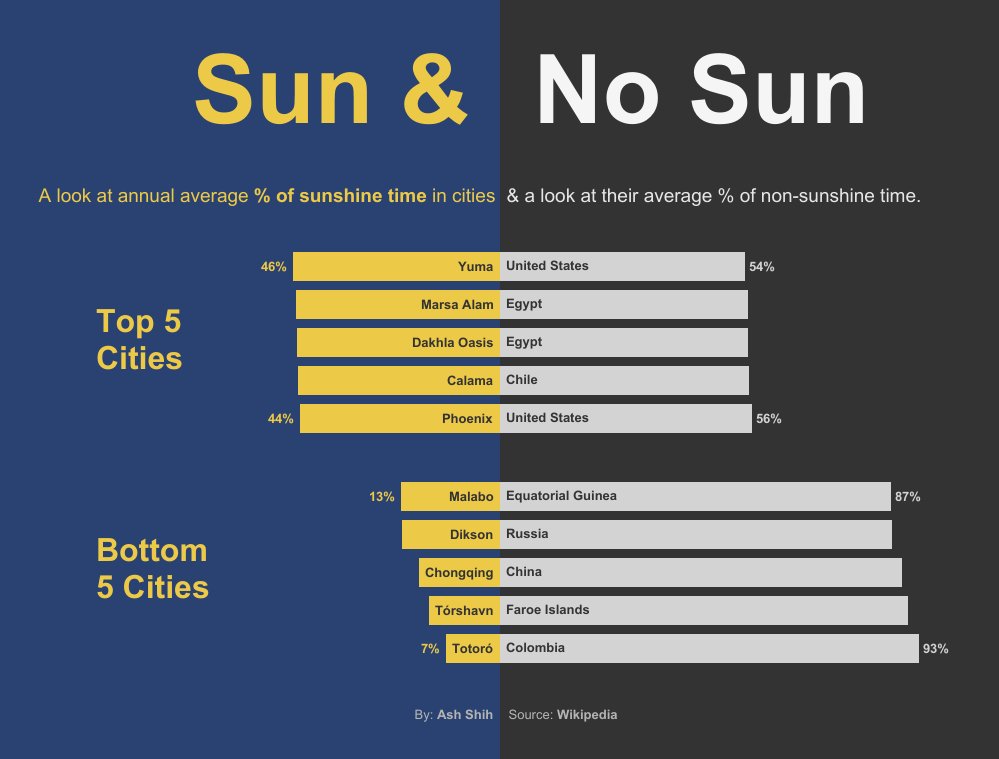 Half and Half: Great for comparisons 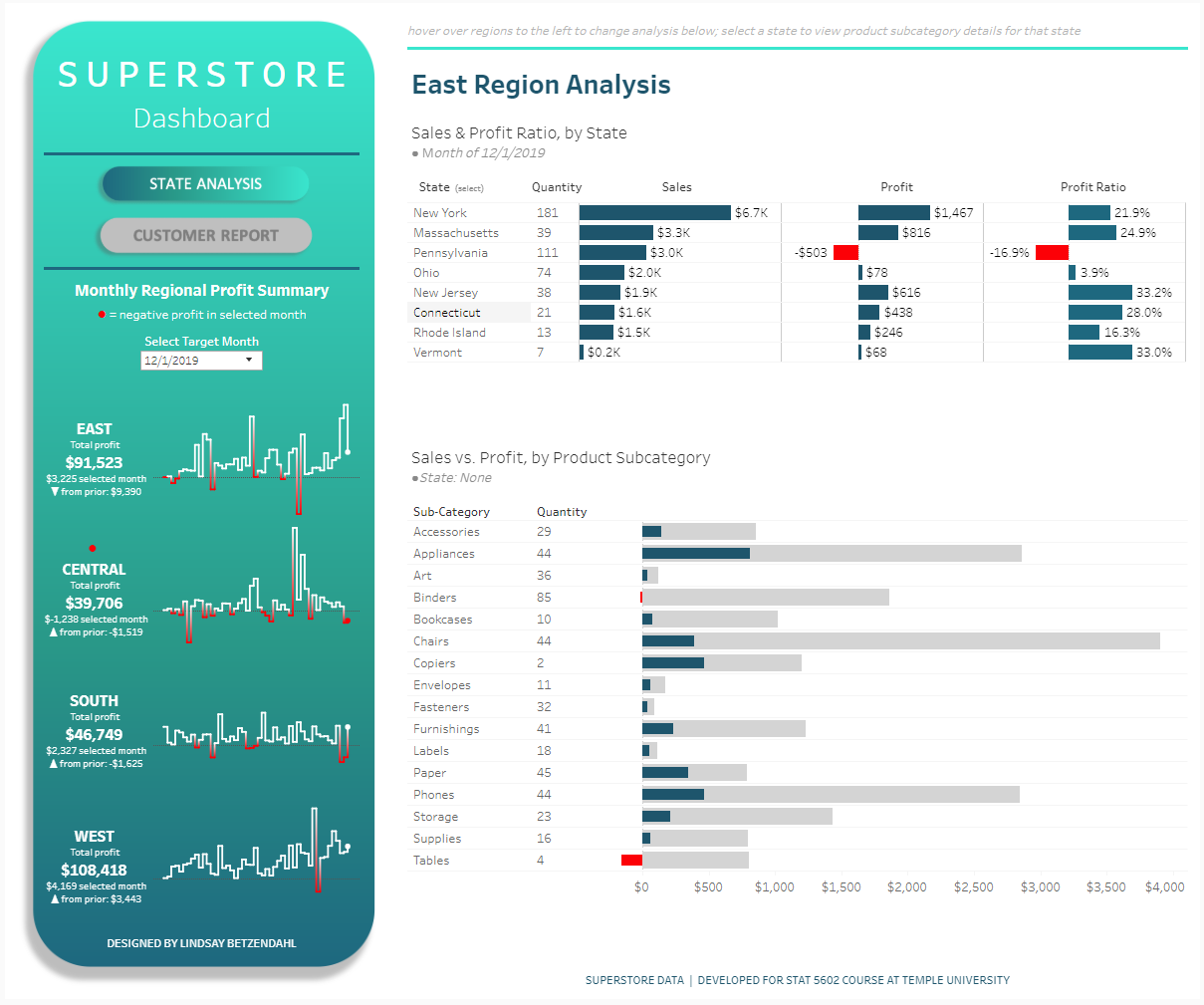 Side panel: Can be a picture, chart, or information 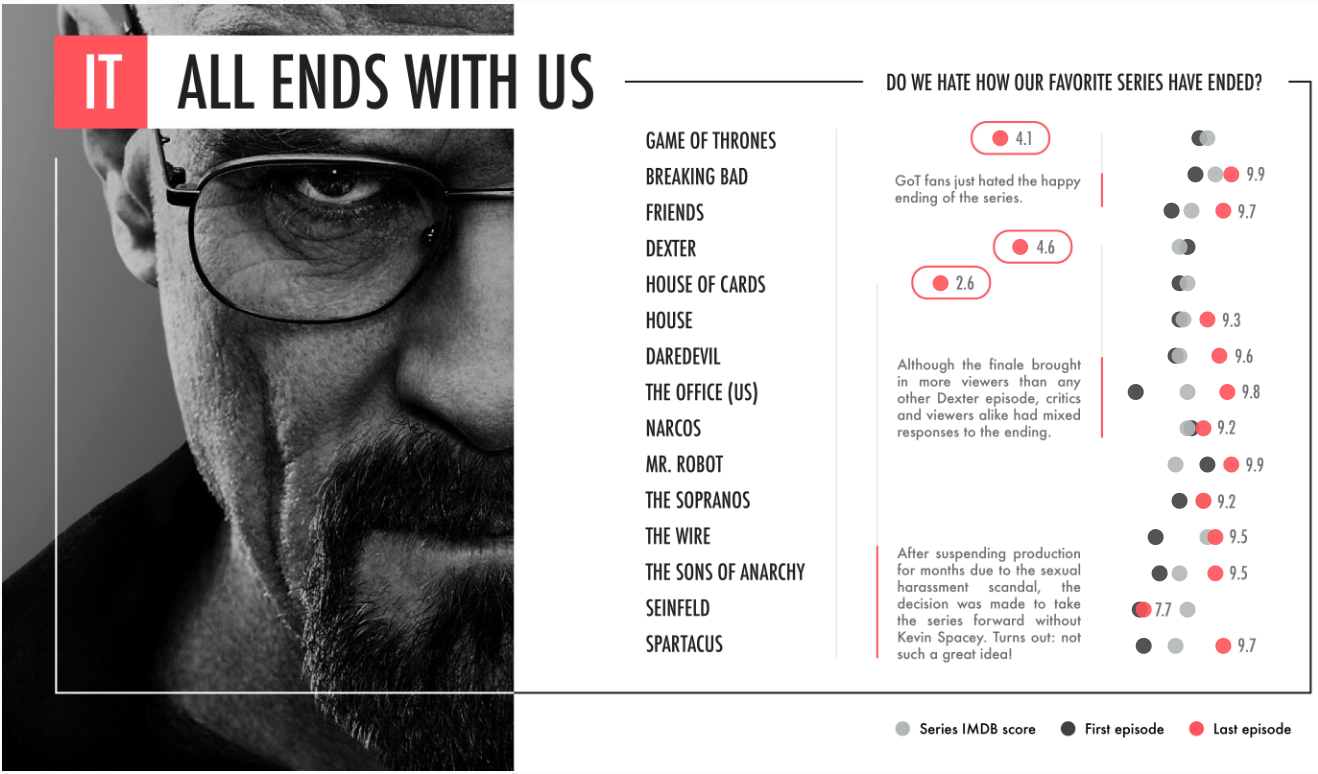 Whilst having charts and visually appealing charts is often a key component in creating a desirable dashboard. Sometimes using a simple chart could be just as effective if not more effective than a complicated one. Here is an example from Makeover Monday 2020 Week 1, where both have been chosen as the winners of that week. 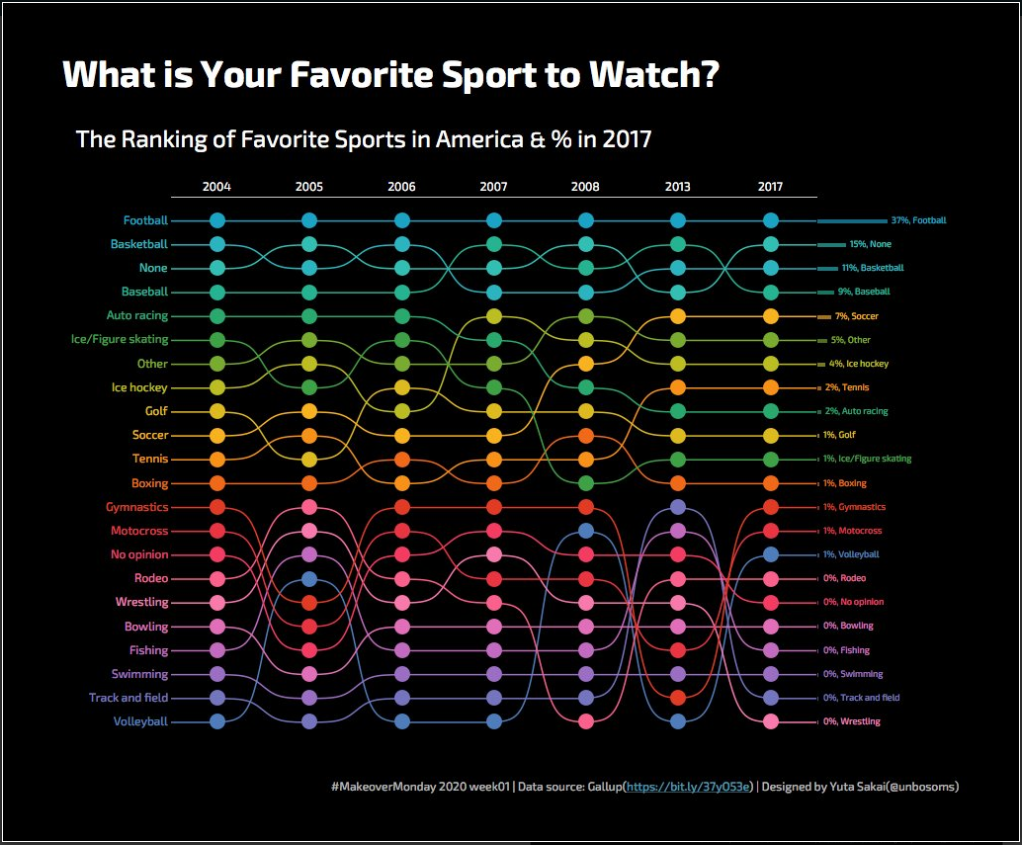 First of all, this is evidently a visually stunning piece as well as something that isn’t readily available to used in Tableau. It’s story tries to present a timeline of how a sport’s popularity has changed in America. Although the multitude of colours adds to the visual attraction of the data, it is kind of distracting in a way. This coupled with the non linear and overlapping patterns of the time-series can kind of be distracting. The audience may be overwhelmed and find it hard to draw out conclusions. 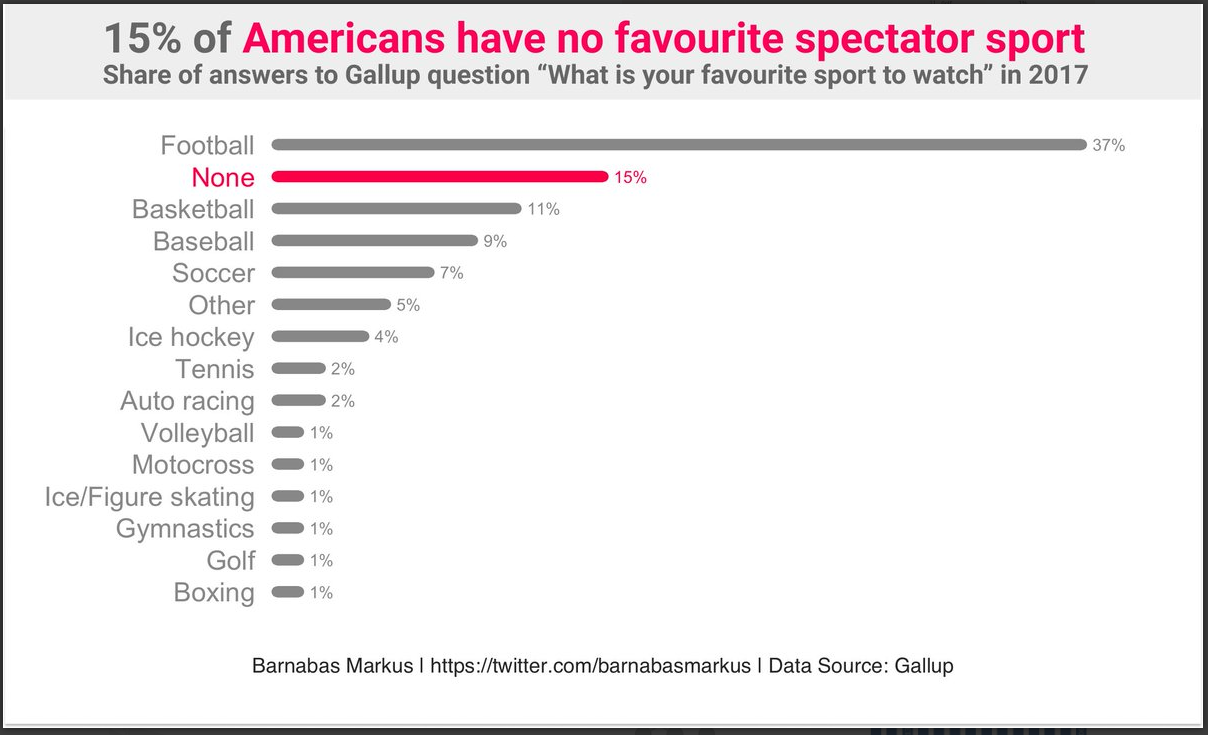 Comparatively, this a much simpler viz. In fact it basically is what was on the right side of the previous chart. However, does this make this viz inferior? Visually obviously most would prefer the prior chart. Yet the simplicity of of this one makes it beautiful in its own right. It is definitely clear in its story which presents itself with the simple colour contrast and title. Anyone could look at this and immediately understand that many Americans don’t have a favourite sport. This would also take much less time, leaving you to find more insights on your own. In no way am I saying that this is better than the first viz. Rather that depending on what you want to achieve, sometimes a simple bar chart may be your answer.

Lastly, although the Tableau Community is wonderful and encouraging. You will be sure to face the wrath of them if you produce something like this: 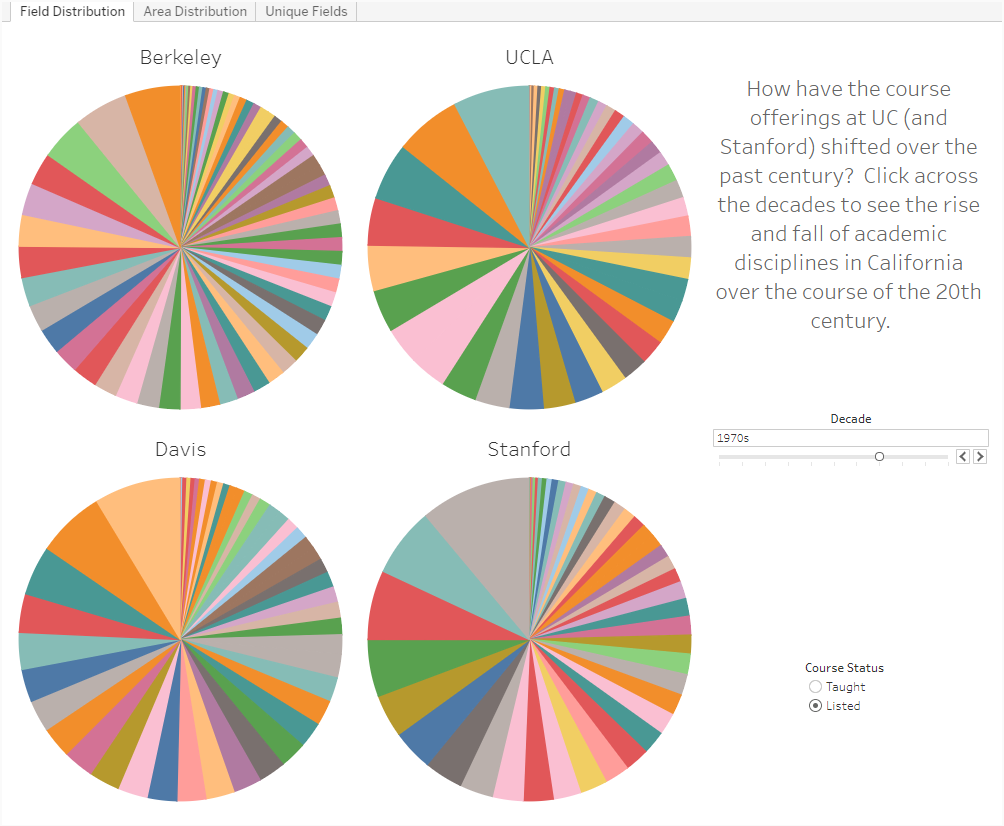