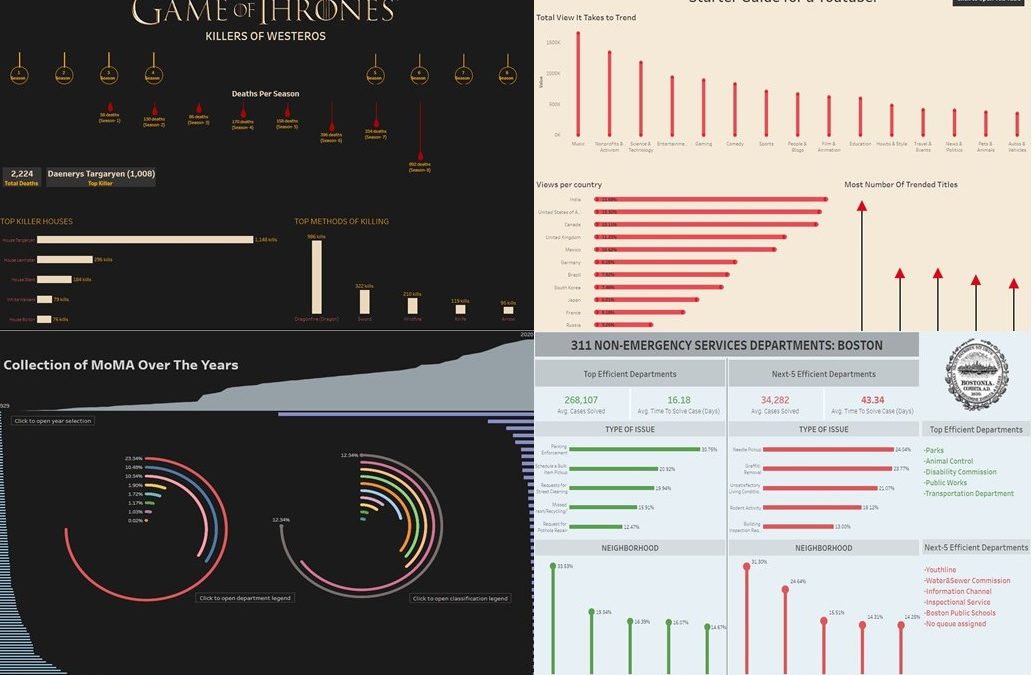 What is a Dashboard Week?

As a part of The Data School training, during dashboard week, we were given a dataset in the morning and each one has to built a dashboard and find insights by the end of the day and preset it next morning. And this cycle repeats for the rest of the week.

Our first two datasets were on Game of Thrones and YouTube trending videos (find the link to my Game of Thrones Dashboard and YouTube trending videos Dashboard). We had to use API to download the dataset to Alteryx for Game of Thrones. From a vast and rich datasets available, one could easily get overwhelmed. But to see it as a whole and pick the right dataset that start exploring was the key to work with in a very shot amount of time. Whereas, on the day-2, when I got the dataset, I already had some experience from previous day to be ready for any dataset. By the end of day-2, clearly, timeboxing is the key takeaway so far. It took me less time to complete the task as compared to the previous day.

Though I was able to complete the day-2 task in less time as compared to day-1, I still felt that another key element is missing so as to built the dashboards ‘on time’. During my day-3 task, which was The Museum of Modern Art (MoMA), key learning before I started this task was that instead of getting lost in the data and trying to work on difference theories. Just understand the data and concentrate on one aspect. That is do not over complicate, specially when you have very limited time. After going through the dataset, I had a direction where I wanted to go. I concentrated on that and was able to built a dashboard and good insights. I was also able to complete the dashboard on time.

Key Learnings from the Dashboard Week

It sounds and feel scary at the beginning of the week thinking about completing the task in one day which includes data wrangling and building a dashboard with insights. But by the end of the week, when I retrospect, I realized how much I learned during the dashboard week. So what were these learnings. lets discuss them one by one.

Timeboxing plays a very important role in finishing the task one time. It is easy to start working on a task and don’t have track to how much time invested in completing it. If you divide your task and keep track of time allocated to each task, you can push yourself and can become more efficient.

Do Not Over Complicate

When you have vast amount of data, its easy to get lost in exploring everything and miss the bigger picture. There can be many insights on one dataset. Having a look on the dataset and picking one aspect of it and work towards it. This will save your project from becoming over complicated and finish the task on time.