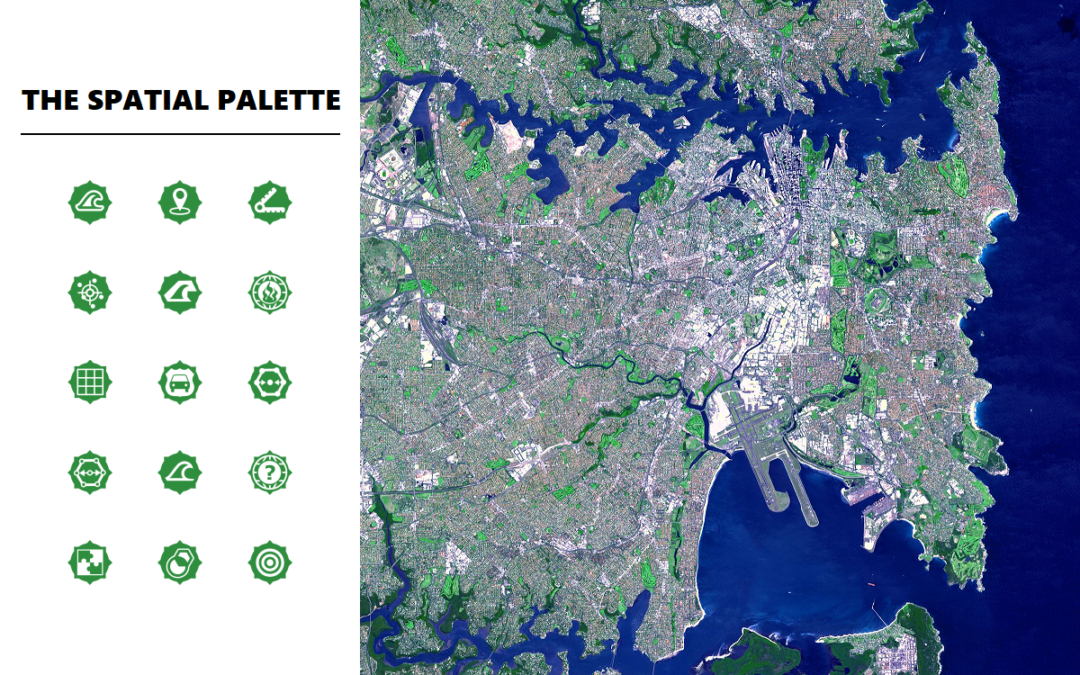 Spatial analysis most commonly refers to the interpretation and analysis of geographical data on a geometric plane. Although there are many platforms that are capable of managing, manipulating and analysing spatial data, Alteryx allows you to combine spatial and non-spatial data analysis in one powerful analytics package. The spatial tool palette in Alteryx contains 15 distinct tools each with unique features, which as a whole provides a wide range of functionality. This guide will cover how each tool can be used for a certain purpose in the realm of spatial analytics.

There are 3 types of spatial objects: Point, Line and Polygon. A point is a reference to a single location, usually mapped from X and Y coordinates. A line is a representation of 2 or more points connected in a sequence. A polygon is the enclosed area of a 2D shape that is created from 3 or more points. Some Alteryx spatial tools specifically use a point spatial object to compute the output. In these cases, a line or polygon input would still work, as the tool would automatically determine the centroid of that spatial object. The centroid of a line is the point that is equidistant from both ends of the line, while the centroid of a polygon is the point that is the average of all points that make up the polygon.

The Buffer tool inputs a spatial object, and expands or contracts its boundaries based on a configurable distance. For the purpose of optimisation, the number of points in the output is limited by default. You can remove the limit by unchecking the generalise option to obtain a more accurate buffer.

The Create Points tool inputs X (Longitude) and Y (Latitude) values and generates a point. By default, the tool takes traditional decimal format longitude and latitude as the input, but there are other options that allow it to process integer coordinates or coordinates from an alternative spatial reference system.

The Heat Map tool inputs a spatial object field and outputs polygons representing areas of different heat groups. The tool does this by creating square grid tiles and calculating the heat for each tile based on the density of spatial objects in that tile and their heat weighting, which can be optionally specified. Heat from any tile increases the heat in nearby tiles to a lesser extent, dropping off with distance. Tiles are then aggregated into heat categories and combined into a polygon for each heat category. You can configure the grid size, maximum distance that a tile affects the heat in nearby tiles, and the rate of decay that heat drops off from distance. The default output is smoothed so that the edges of the combined polygons are rounded, but this option can be unchecked. You can choose between the stacked option for the output, where each heat category polygon overlaps over the lower heat categories, or the donut option, where the polygons do not overlap.

The Non Overlap Drivetime tool inputs a spatial object field and creates a polygon based on a configurable drivetime radius around each point or centroid, while ensuring the polygons do not overlap each other. You can configure the grid size, which the tool uses to divide the polygons and determine which point to allocate overlapping areas.

The Poly-Build tool inputs a point spatial object field and builds lines or polygons. There are 3 output options to decide from. The first one is to create a convex hull, which is the smallest convex polygon that contains all points. A convex polygon is a shape where all internal angles are less than 180 degrees. The second option creates a polygon by joining points in a specified order to form an enclosed shape, and the third option creates a line by joining points in the specified order. You can also choose to group by another field to create multiple lines or polygons.

The Trade Area tool inputs a spatial object and creates a circle polygon around a point or centroid, sized based on the configured radius. The radius can be either a straight line distance or calculated from drivetime minutes.

And that’s all 15 Alteryx spatial tools. Hopefully, this proves to be a useful reference guide in your spatial analytics journey. Check out part 2 of this spatial analysis guide here, where I go over spatial functions outside of the spatial tool palette.